Trust Me, I'm A Banker 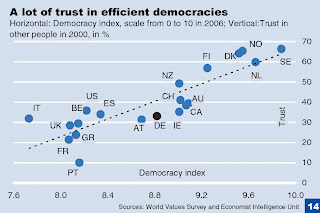 I was speaking yesterday at the launch of Business in the Community's Corporate Responsibility Week. One of the issues that came up a lot during and after the session was the issue of trust. I think it is becoming increasingly clear that the essence of the present financial crisis is a collapse in trust: including trust between banks and other banks; between banks and their customers; and indeed between banks and governments.

Robert Reich puts it well in his assessment of the crisis on Wall Street:

The Street has suffered a serious decline in trust. Yet trust is its most important asset. Financial markets trade in promises -- that assets have a certain value, that numbers on a balance sheet are accurate, that a loan carries a limited risk. If investors stop trusting those promises, Wall Street can't function.

But in the last few years, many Wall Street promises have not been worth the paper they're written on. That's because, when the securities market was roaring, many financial players had no idea what they were buying or selling, and worse, they didn't care. Derivatives on derivatives; so-called special investment vehicles to move assets off balance sheets; credit default swaps; and of course securities backed by risky home loans. There seemed no limit to the financial smoke and mirrors. That meant almost no limit to what was promised. And regulators looked the other way.

It worked great as long as everyone kept trusting and the market kept roaring. But all it took was a few broken promises for the whole system to break down. What to do? Not to socialize capitalism, as is now being done. What's lacking isn't capital, it's trust. And the only way to rebuild trust is through regulations that require financial players to stand behind their promises and tell the truth, along with strict oversight to make sure they do.

Irish bankers have presided over the loss of approximately 80% of the value of financial stocks since their peak on 21st February 2007. That's a lot of ground to make up before we're even back to square one. No wonder the Irish Association of Pension Funds is warning about a possible collapse in some defined benefit pension funds. I can't see us getting back to the peak for a decade or more (in real terms: runaway inflation might get us there sooner in nominal terms). In my more pessimistic moments I think it might take a generation.

Recovery requires (re)building trust. But that is far more difficult when trust has been lost than when it wasn't there in the first place. There's an interesting debate about trust in society on the usually fascinating Thinking Allowed series on BBC Radio 4. Onora O'Neill (no relation!) and Mark Kohn discuss the lack of trust in various public representatives, including politicians and bankers. The interview took place in July, I'm guessing bankers might come off even worse in light of recent events. Kohn makes the point that game simulations of trust show that the best strategy is, in the first instance, to assume that the other party to an interaction is trustworthy and will reciprocate any positive gesture. But if the other party fails to reciprocate then there is no trust and the outcome is much worse (and harder to reverse) than if trust had been built at the start.

There is now a growing body of research about the role of trust in economic and societal progress. For example, a recent paper from ZEW (pdf) examines the impact of trust on reforms in different countries and finds that:

... in high-trust environments it is easier to agree on (in the long run) welfare enhancing reforms. Among the theoretical arguments which lead to this conclusion are the reduction of information decits due to a higher level of information attained by individuals in high-trust societies, the moderation of conflicts regarding the wealth distribution in environments of high trust, and the possibility to make credible promises for compensation of reform losers.

And as a recent DB Research report (from which the chart above) shows, there is a strong correlation between levels of trust in society and numerous other indices, including freedom, the health of democractic institutions, economic growth and innovation levels.

Recovering from the current crisis, and restoring the wealth of Irish citizens in general and Irish pension holders in particular, will require sustained, deliberate efforts to build trust. Efforts on the part of our bankers to be sure, but also on the part of our politicians, journalists and regulators. Unfortunately all the evidence is that it takes longer to regain trust than to lose it in the first place. So better get started ...
Posted by Gerard O'Neill at Saturday, October 04, 2008