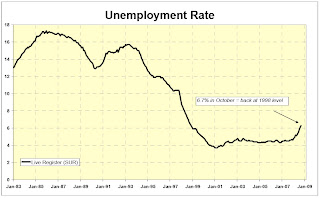 Will consumers come to the rescue of Ireland's economy? In the short term (excluding the Christmas effect) the answer is probably not. Consumer sentiment is extraordinarily volatile at present - mostly on the negative side. The mood - as far as I can gather it from various surveys and focus groups I've been involved in - is that people expect things to get worse before they get better. So they are battening down the spending hatches.

So there is still a strong psychological influence on consumer spending: even if the 'objective' macroeconomic statistics are starting to support their wariness. One such statistic is the headline unemployment rate. No other factor, in my experience, has the same double-whammy impact at both macro and psychological measures. With unemployment rising then consumers see every justification for holding back and setting aside some savings for the proverbial rainy day. That said, the current unemployment level - whilst back to where it was ten years ago - is still a long, long way away from the extremes of the late 1980s and early 1990s. As illustrated in the chart from yesterday's Ulster Bank quarterly economic report (pdf).

Of course, our economic prospects depend more on US consumers than on Irish consumers for future growth momentum. Which is why Noriel Roubini's analysis of 20 reasons why capitulating consumers will trigger the worst recession in decades is a tad discouraging. Fundamentally, he sees it taking years for American consumers to get out from under the massive debt overhang they built up during the sub-prime years. We had a fairly similar build-up in Ireland, by the way.

That said, it isn't consumer spending that gets the economy going (in the Keynesian sense of things), rather it is investment in productive capacity that correctly anticipates future demand. Or as this essay puts it:

The first thing to realize is that people do not decide to "spend" or not; rather, they decide whether to spend in the present versus in the future.

... The uncertainty isn't phony; people really don't know what's going to happen next month. In this situation, it is entirely appropriate for humans to stop cranking out so many iPods and designer clothes, allowing a temporary build-up of the resources that go into the production of these nonessential items.

... For long-run sustainable output, businesses want to have finished products emerging from the pipeline just when consumers want to buy them. Market prices and the profit-and-loss system provide the best means of allowing entrepreneurs to make these forecasts.

If there is a role for Government in all this it is primarily one of reducing uncertainty by clearly stating what it's going to do/not do and when it will be finished. Otherwise we'll just leave our savings in (run-proof selection) of bank accounts.
Posted by Gerard O'Neill at Tuesday, November 18, 2008