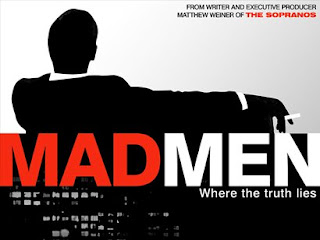 I'm a big fan of Mad Men - a wonderful series set in the New York advertising scene in the early 1960s. There is something utterly fascinating about the world that it portrays: one at the cusp of extraordinary cultural change - a decade that started with men still wearing hats and suits, and ended with men wearing beads and sandals. It also portrays the heyday of mass media and mass markets - the likes of which we will never see again.

What we are now seeing is the emergence of what futurist James Ogilvy called "advertising dividend" in a memorable essay entitled Earth Might Be Fair, first published in 1995. This is what he envisaged:

But what would all the ... advertising and copywriters do? ... Let them play. I'm serious. ... At risk of gross over simplification I wan to say that our most vexing problems today are not problems that can be solved by science and technology; they are problems that call for a degree of social invention that we have not seen since the creation of democracy ... We don't yet know how to organize or human interactions.

Despite the wonders of modern science there never seems to be enough: enough love, enough attention, enough respect, enough dignity. ... I know of no law of the constant conservation of laughter, or any limitation on joy. I see no reason to limit our sense of what is possible for the distribution of delight. ... Quite the contrary, there might be a virtuous circle of mutual reinforcement in the spread of sublime delight, like a ripple of laughter that gains momentum in a crowd. According to the economics of the sublime, there can be enough for all.

I love his turn of phrase and sense of the future's potential. The essay was written thirteen years ago and I believe a lot of what he foresaw is coming to pass. The emergence of Web 2.0 and social networking has found a way to free up the advertising dividend, to better 'organize our human interactions'. It is wonderful to behold.

The current recession will accelerate these trends, and then some. Already concepts like JungleSmash are cutting out the advertising agency planner and copywriter and letting the YouTube generation make their own advertising. And I think there's a lot more of this sort of thing to come as we get to spend the advertising dividend not on mass marketing but on a one-to-one dialogue that we will all (advertisers and consumers) find more meaningful and rewarding.
Posted by Gerard O'Neill at Friday, November 07, 2008