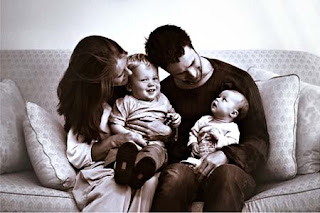 All happy families resemble one another, but each unhappy family is unhappy in its own way. Leo Tolstoy

The UK's Centre for Social Justice has launched a campaign today to encourage law reforms to strengthen marriage and combat family breakdown. I think they're right - even if they're swimming against the cultural tide at present. As I've noted before, marriage is a social construct - but that doesn't make it optional. No more than language or money are optional - even if both are cultural creations. At least, that is, if you want to enjoy a standard of living somewhat higher than that of hunter gatherers.

The Catholic Church in Ireland has been in the vanguard of campaigning for the traditional marriage-based family: extraordinary really that the 'case' has to be made for it, but there you go. I guess what they can't say is that marriage is like democracy: a terrible idea - except for all the alternatives. Perhaps the new economic realities might help some appreciate the power of married life as the foundation of healthy families, communities and societies. If only as a reaction against the delusional extremes of 'happyism' which seem to suggest that if you're not happy with your lot in life then you just need to move on and try something different. Doesn't really make sense in theory or in practice.

As Libertarian leaning thinkers like Richard Epstein points out (listen to this wonderful podcast on the subject) - the problem with a lot of the 'happiness economics' is that it assumes happiness is the ultimate priority in life when in fact it is a very secondary feature (welcome and all as it is from time-to-time). But like most libertarians Epstein thinks that the biggest problem facing many of those who support the idea of marriage (including the Catholic Church) is that they end up supporting the state - ultimately the greatest threat to family life.

And that is a pity: because marriage has been around for much longer than the state. So why look to a relatively new institution to protect an older institution? As Epstein suggests, the Catholic Church and other churches should campaign to take the government out of marriage - the better to strengthen it in the eyes of free citizens:

All churches should have the absolute power to decide which unions they will recognize and which not. But no church may invoke state power to block the like liberties of other churches. We need free entry and open competition on divisive cultural issues, as everywhere else. We mustn't let the shape of the law turn on the outcome a moral debate in which neither side can persuade the other. It's best to keep the state out of the marriage business altogether.

For as the Adam Smith Institute observes about the Centre for Social Justice's campaign:

Ever since marriage was institutionalized, it has been a menage a trois: the couple and the government. The government, whichever party happens to be in power, lures the couple into a painful triangular relationship with the come-to-bed-eyes of tax breaks, credits, allowances or benefits as the lubricant. It's time for this hideous, political lover was kicked from the matrimonial bed.

Now that would be something to see: Libertarians and Catholic Bishops campaigning for the same ideals!
Posted by Gerard O'Neill at Wednesday, November 19, 2008