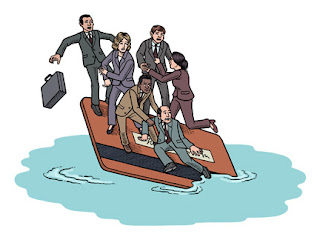 The news on the front of the Sunday Tribune today is that a confidential government briefing estimates Irish private pensions are underfunded to the tune of some €30 billion. The Taoiseach has responded by saying he'll engage with the pension industry "to review funding arrangements". Phew: for a moment there I thought we were facing an insurmountable problem, but no, the Taoiseach will sort it out. Yeah right.

For me the surprise is that anyone is surprised about this. It's not exactly 'news' that Irish stocks have imploded, taking pension and investment funds with them. What on earth did they think was going to happen to the funding liabilities of Irish defined benefit pensions (and defined contribution) in light of the most severe decline in Irish stocks in living memory? As I've noted before: there is disgracefully little information about the performance of Irish pension funds in the public domain - perhaps now this will change? Too late for tens of thousands of Irish workers hoping to retire some time in the next 10 years however.

According to the Tribune's report on the confidential document, it finds that:

"The investment losses will also be serious for members of Defined Contribution schemes who bear all the investment risks. Best practice would dictate that pension administrators should ensure that a person's fund is protected as they near retirement, by switching assets to more conservative investments. However, there is anecdotal evidence that this practice is not generally applied and as a result Defined Contribution members have been exposed to more risk than they might realise."

Translation: the bozos in charge of the pension funds were pumping workers' contributions into Irish and other financial stocks as they bungee jumped off their peak in February 2007. In other words, we are facing the consequences of utterly immoral and irresponsible behaviour that will deny tens of thousands of workers a decent standard of living in their retirement. This makes the property lending ponzi scheme run by the banks during the boom seem like a model of fiscal rectitude by comparison.

Word of advice to the Taoiseach: climb way, way up on the fence on this one - you really don't want to get caught in the tsunami of anger that will explode over the coming months and years as people realise their dreams of a comfortable, early retirement have been turned to dust ...
Posted by Gerard O'Neill at Sunday, November 30, 2008