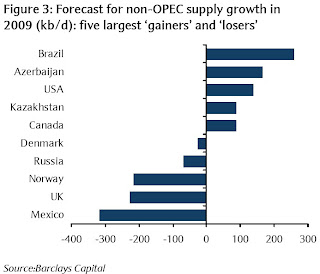 We're all enjoying the fall in petrol and diesel prices at our local forecourts. My advice: enjoy it while it lasts. Because it won't. The chart is from a gloomy report (pdf) by Barclays Capital (via The Oil Drum - the best energy discussion on the web): it shows the outlook for non-OPEC oil supply growth next year. Non-OPEC oil output peaked last year and is down this year; Barclays expect a further fall next year. Nor is this simply a reaction to falling oil prices since their peak in July (though that is undoubtedly a factor), rather we are seeing a faster onset of the peak in non-OPEC oil production than previously anticipated. It looks like it was 2007, even though projections as recently as last year were going for 2011.

The non-OPEC trend partly explains the International Energy Agency's increasingly alarmist assessment of the medium-term outlook for oil supplies - the IEA doesn't usually do alarmism. As I've noted before, Ireland is horribly vulnerable to adverse developments in global energy trends in general and to adverse UK developments in particular. So it just as well that businesses in the UK, including Shell, Virgin and Scottish & Southern Energy, have come together to map out Britain's response to the oil supply challenge. In a recently release report from The Peak Oil Taskforce called The Oil Crunch: Securing the UK's Energy Future, a number of contributors have mapped out how big and close the challenge is; and what has to be done about it.

As the chapter by Shell notes:

It is right to have concerns about the way something as important as our global energy system will develop, and to recognise that urgent steps are required to shape better outcomes over the decades ahead. Given the natural timescales of energy-using and energyproducing facilities, it takes time to increase energy efficiency, boost complementary energy sources and deploy capture and storage technology.

The energy issue hasn't gone away, even if oil prices are down more than 50% from their peak just a few months ago. At the same time there is still time: we can still champion open markets for energy exploration, production and distribution; as well as supporting innovators and entrepreneurs focused on the post-carbon opportunities that lie ahead. But we don't have to go overboard either - becoming 'carborexic', as hilariously described by Ruth Tierney in today's Sunday Times. Lifestyle changes that flie in the face of economic and ecological sense might salve the consciences of overwrought greenies, but the rest of us can still make more sensible adjustments. Like on the issue of food miles: if you really want to reduce the food miles in your shopping basket just walk to the supermarket - it's driving your groceries home that adds by far the largest component to any food miles calculations.

An outbreak of carborexia is the last thing our economy needs right now.
Posted by Gerard O'Neill at Sunday, November 09, 2008