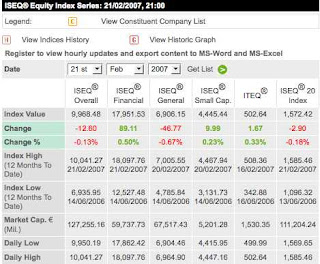 A lot of businesses will be talking to their bank in the months ahead, seeking extra finance to see them through extraordinary changes. The discussion will be accompanied by the usual 'due diligence' as their bank managers suck their teeth and tut-tut about any unseemly profligacy on the part of small business owners. And if they small business has experienced a loss then their managers might even fret about their balance sheet.

Well the attached chart is for all those SME managers in that position: it shows the value of Irish shares - including all financial stocks - on 21st February 2007. The peak of the peak of the Celtic Tiger boom as far as stock prices were concerned. We will never see the likes of it again (at least not for another generation). Just compare the chart to the latest ISEQ indices to see how far things have fallen. The managers of Irish financial institutions have so far presided over the destruction of some 93% of shareholder wealth in just 21 months. Your turn for teeth sucking and tut-tutting.

What is slowly dawning on people - to gauge from an increasing number of conversations with business folk - is that their nest eggs have been destroyed, and with it a change to get off the treadmill any time in the next decade or two. The destruction of shareholder wealth in Ireland will reverberate for decades - long after angry 70-somethings have got their medical cards back. Just how bad things will be for Irish people in their forties and fifties is seen in a recent US study (pdf) - where things have not been as bad as in Ireland:

My emphasis added. Remember - we've seen even greater collapses in house prices and share prices in Ireland - so the numbers are worse for any Irish family expecting to live on a defined contribution pension. The way I see it, middle class, middle aged folk generally don't do marches and street protests (they're too busy working) but they do vote and something tells me they'll be making their feelings felt next time they're anywhere near a ballot box.
Posted by Gerard O'Neill at Friday, November 21, 2008