There, But for the Grace of the Euro, Go We 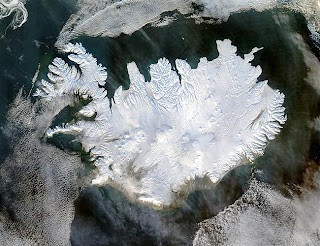 One memory I have of Dublin in the 1990s is walking around the city centre hearing the oddest language being spoken by groups of visitors that was impossible to place. It turned out they were all from Iceland, taking advantage of our low prices (honestly!) to do a bit of pre-Christmas shopping. Then they stopped coming, or maybe their accents were drowned out in the many others that could be heard as the decade ended.

Now it looks like we're going to hear a lot more Icelandic accents in the months and years ahead on the streets of Dublin. The explanation, of course, is the spectacular implosion of their economy, as documented in an extraordinary essay over at VoxEU:
The stuff of economic nightmares indeed. It is also a salutary reminder that small open economies on the periphery of larger markets suffer more in economic storms than larger economies with stronger domestic bases. Small economies like Ireland, for example. While we didn't go quite as far out on the debt limb as Iceland, we have witnessed a similar inflation in exposure to foreign liabilities, with a third of all Irish lending funded by overseas borrowing.

Whatever about the advantages and disadvantages of membership of the eurozone, there is no doubt that we would have 'done an Iceland' in recent weeks were it not for the euro. Of course, you could argue - as Davy did in their recent outlook for 2009 - that we wouldn't have gotten into our current debt-fuelled economic mess if we hadn't been in the euro in the first place.

Mind you, apartments in Reykjavik are going to be really cheap next year, hmm.
Posted by Gerard O'Neill at Wednesday, November 12, 2008