A Bailout for Consumers 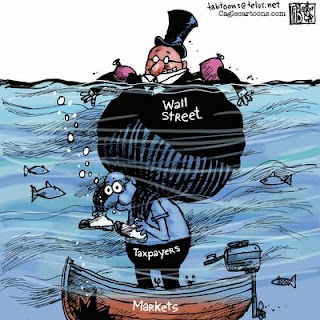 Now that the Government has 'rescued' three Irish banks, I wonder what they will do for an encore? A lot of meddling and fine-tuning seems set to result from the details announced yesterday. They're even insisting the three banks pony up €100 million each for a fund 'to support environment friendly investments with a view to reducing energy usage, facilitating switching to renewable energies with a view to reducing Ireland's carbon footprint'. Read: lots of pet projects that no commercial lender would touch with a barge pole. Still: the potential list of sectors warranting 'special funds' is potentially infinite, so I guess we should be grateful they stuck to just one.

The question is: will it work? The proposed recapitalisation probably falls into the category of what Patrick Honohan calls Too Little, Too Late (pdf) in a useful summary of the crisis so far. The amounts seem small relative to the potential liabilities - and the announcement only covers three of the six original institutions. Presumably there's more to come - which is the problem. The level of uncertainty now facing shareholders, debtholders and other banks tied into syndicated lending with the three just 'recapitalised' is not what is needed right now.

Worse, as the little €300 million euro eco-fund indicates, once governments get used to directing things themselves they're liable to experience a certain amount of 'mission creep'. We've seen it with the car bailout in the United States - even our own pigmeat industry. I sense a slippery slope, anticipated by the authors of How Not To Solve A Crisis (pdf) when they observe that:

The better solution to the problems that continue to plague the financial system would be to reduce regulatory burdens that contributed to the crisis. If financial markets were governed by simple, clear rules, there would be less incentive for regulatory arbitrage and more incentive to generate innovations that create genuine benefits for people.

Finally, to the extent that fiscal measures might help solve the current problems faced now not only by financial companies but also by the majority of participants in the global economy, we caution against any direct intervention by government. Governments are terrible at allocating resources and their attempts to boost our economies will almost certainly backfire. Economic growth is the result of entrepreneurs identifying and filling niches by developing better products and production processes, thereby boosting production and productivity. In contrast, when governments throw money at the economy, they divert resources away from their most efficient and effective uses, undermining innovation and growth.

The best way to stimulate the economies of the world would be to reduce the number of overbearing taxes and regulations that currently inhibit the development and delivery of all manner of products and services.

But the genie is out of the bottle, and we should be worried. Willem Buiter is too - he has this to say:

Even if the government could do something about individual cases of unemployment or small business failure, God forbid that they should try. The responsbility of government is not to provide security at all cost - to keep us safe from all harm. It is to defend and safeguard our freedom. The main threat to our freedom is not Al Queda, other mad terrorists or the acknowledged totalitarian threats of the past and the present. It is government itself - the well-intentioned, paternalistic, we-know-what’s-good-for-you, we’ll-ram-your-happiness-(as-we-see-it)-down-your-throat apostles of benevolent despotism that are in the ascendant throughout what I used to think of as the free world.

He's absolutely right. The only way to stop this is to demand tax cuts rather than spending increases. US experience shows that the multiplier impact on GDP growth of tax cuts is three times that of infrastructural spending. Moreover, the Government could even secure a double whammy benefit through tax cuts: by saving the Irish retail sector. The Forfás Report published today shows massive differences in the costs of doing business in Dublin versus cities in the UK and Belgium. Not of all of it is down to input cost differences (implying some 'rip off' behaviour) - but enough to make a meaningful difference if it could be narrowed.

So, I'm off to form an orderly queue at the Department of Finance - it's the consumers' turn now.
Posted by Gerard O'Neill at Monday, December 22, 2008