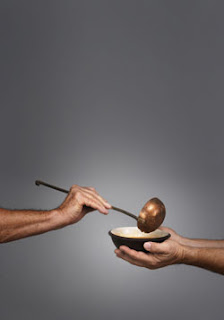 Oh well, there was me hoping we might get to Christmas without some dreary sermon about how terrible all this consumerism is ... but it was not to be. Our Beloved Leader, President McAleese, was reported as observing during her trip to the United States last week that:

I think that every one of us would have to say, with our hands on our hearts, that we were all consumed by that same element of consumerism... Somewhere along the line, we began to think that we weren't happy with deferred gratification... We had to have it now and in this moment, and I think that we have paid a very, very big price for that very radical shift. And now the balance presumably is going to swing the other way, and it will be no harm... We clearly have come from from quite unbalanced times, and they have not been able to secure for us the kind of peace of mind, peace of heart, contentment, we would have wished for. Now we're trying to find our way back to a more rooted and possibly more modest time.

It isn't in her official speech, but it hasn't been denied, and she has said much the same thing before. Her speech struck a chord, though probably not the one she intended. Even The Irish Times was moved to condemn more 'finger wagging from the Aras', and the Sunday Independent has suggested she takes a €200,000 pay cut just to show the rest of us what 'modest times' really mean.

There is something extraordinarily irritating about clergymen, politicians and academics lecturing the rest of us hoi polloi about our crass materialism and rampant consumerism. Apart from the fact that they never have to worry about where the money is going to come from to pay their bills every month, I do wonder about the Amish-like utopia they want us all to enjoy. I walk past empty shops and restaurants and see the shattered dreams of the people who started them, and the death of their ambitions to build successful businesses that met the needs of their customers. Still, at least they can now secure "the kind of peace of mind, peace of heart, contentment, we would have wished for". It seems to me that the people who decry 'rampant consumerism' are actually filled with contempt for real people.

But not all clergy are that idiotic. As the Reverend Robert Sirico observes:

This is the time of the year when almost everyone has gift-giving (if not gift-getting) on the mind. We also hear the usual series of warnings against making Christmas too materialistic. That is, of course, completely appropriate when animated by a desire to remind us of the belief that "veiled in flesh" it is the Godhead we see -- as one of the more theological carols teaches us. But when some people imply that buying or giving gifts is somehow sinful and goes against the spirit of Christmas, this is another matter all together...

There is another, perhaps more practical aspect of the giving of gifts that is worth pondering which was brought to the fore by Arthur Brooks, author of the 2006 book "Who Really Cares: America's Charity Divide - Who Gives, Who Doesn't and Why it Matters." ... Among his findings was that the general profile of the gift-giver is one who has a strong family life and who attends church regularly.

Yet, there is another aspect to Mr. Brooks' research worth noting, especially at this time of the year and in the midst of these troubling economic times. At a recent conference in Rome, Brooks said that his research revealed that "when people give they get happier, and when they get happier, they are more productive and become richer." ...

... to have a general spirit of gratitude for the innumerable gifts which surround us, yes, even in these difficult and uncertain times, is to increase a positive sense of the world. In this we see a hopefulness of spirit which in turn enables us to look about us and see the great potential that the world holds in store if we will only keep our eyes open...

The Catholic Church in Ireland could do with a few more advocates of 'compassionate consumerism' like Father Sirico - they might even play a more useful part in getting us through the difficult times ahead.
Posted by Gerard O'Neill at Sunday, December 21, 2008