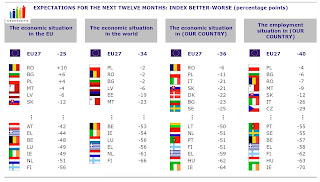 The results of the latest Eurobarometer survey are quite astonishing. They show a seismic shift in Irish consumer sentiment on a year ago - to the extent where we have gone from being one of the more optimistic nations in the EU, to being the most pessimistic. The chart shows an extraordinary degree of pessimism in terms of the Irish people's outlook for the economy and unemployment.

But has sentiment 'gone too far'? As usual in Ireland we tend to be more 'emotionally volatile' when it comes to these kind of surveys than in other countries. It's usually 'boom and bloom' OR 'doom and gloom' with little hanging about in the middle. I wonder sometimes if it is in the nature of smaller countries - perhaps we have a more shared 'zeitgeist' than in larger countries, and so we absorb and share the same mental model, especially about the future. We also have a more homogenous media - so perhaps if the media paints reality to be a certain way (mainly negative recently) then we reflect that back in opinion polls and our behaviour? Maybe not, for as Tim Harford observes about the influence of media on consumer confidence:

It is true that the media can set the economic mood. Two Federal Reserve economists, Mark Doms and Norman Morin, have found evidence that media reports of economic distress (pre-credit crunch) have always tended to knock consumer confidence, even if the economy is doing well. Thankfully, it is a long way from the survey to the high street. Researchers at the National Institute of Economic and Social Research have concluded that surveys of consumer confidence do not provide much help in predicting what consumers subsequently do. In other words, if Peston tells us it’s bad, we repeat his incantations when someone with a clipboard asks us how we’re feeling. Then we pull out our wallets and hit the shops.

Peston is the BBC's equivalent to our George Lee, in case you were wondering.

But what about Hope? As psychologist George Weinberg once said: "Hope never abandons you; you abandon it". Ireland has abandoned Hope - but we can get it back. We need to; and we can. We need a new story about our country - to replace the one we told one another and the world until very recently. The Celtic Tiger story was one of suffering and success. Our new story will be one of regret and renewal. We need to start telling that story in the New Year - to have the hope to 'hold out its hand in the dark' as another George (Iles) once put it. We cannot let the grip of fear tighten.
Posted by Gerard O'Neill at Thursday, December 18, 2008