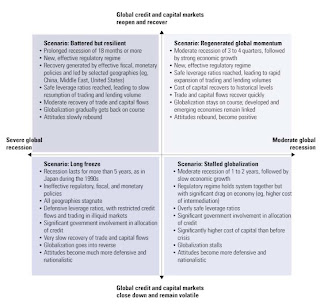 The November Exchequer Statement is grim. This time last year the Government had a surplus of €1.6 billion (tax receipts over expenditure) - twelve months later it has a cumulative deficit of €7.9 billion. We are in the surreal situation of having a fiscal stimulus without the economic stimulation. This is bad, very bad. Stephen Kinsella posts an excellent presentation by UL's Aidan Kane on the current fiscal crisis in an historical context which really brings home how bad things have gotten.

So what is to be done? The path to recovery can only come about if businesses in Ireland create and deliver products and services that others (home and abroad) are ready, willing and able to buy. Such businesses will create employment and wealth, as well as contributing taxes to the Exchequer. To get there we must lower the cost of doing business as well as the barriers to savings, investment and consumption now facing Irish consumers and businesses.

- reducing vat
- reducing all state controlled costs to business (rates, tariffs, red tape)
- getting rid of the minimum wage
- reducing all employment taxes (especially employers' PRSI)
- incentivising export oriented business development activities
- reducing all barriers to entrepreneurship and new business establishment
- supporting social entrepreneurship
- gradually restricting social welfare to the elderly, carers and the disabled (once the jobs are there for those who can work)

- boosting labour productivity through education and training, starting with pre-school
- supporting Irish businesses seeking to expand overseas, including through acquisitions
- making Ireland a European South Korea via massive investment in broadband and next generation communications technologies for businesses and households (though rather more that dongles from 3 mobile)
- ensuring a steadily expanding, secure energy supply (and inter-connections)
- making Ireland an even cheaper place to locate FDI-lead businesses in.

In the final analysis there is only so much the Government - any government - can do. And the thing it can do most is 'do harm'. But that is not a recipe for doing nothing. As the scenarios in the diagram from the latest edition of McKinsey Quarterly (subscription necessary) suggest: things could get much, much worse in the months and years ahead, especially if we enter the Long Freeze. In that case we will have to focus on our 'home' market which is the eurozone. We'll probably be too uncompetitive to compete in the UK, USA and certainly in Asia (unless more Irish businesses buy companies in those markets).

Think of it as the EMEA strategy: companies like Google, Microsoft and IBM have headquartered their European, Middle East and Africa management teams in Ireland. Mainly for the taxes, partly for the labour force. We need to make it more explicit: give EMEA headquarters locating in Ireland added tax write offs for providing accommodation for staff, special visa access for highly skilled foreign workers, English-language training, staff cars etc - like the diplomatic corp.

The net outcome, of course, will be further, substantial falls in tax revenues. Which means spending cuts (real cuts - not the now-you-see-it-now-you-don't nonsense we've been treated to since the budget). That means making many public sector employees redundant. Such a move should obviously be accompanied by measures including retraining, support for subcontracting, revised pension entitlements etc.

For if we don't do this, then we will steal the future from our children and grandchildren by burdening them with a bloated public sector debt used to fund short term pay rises, and spurious partnership agreements. They deserve better - so do we as citizens and taxpayers.
Posted by Gerard O'Neill at Wednesday, December 03, 2008