Too Big To Save 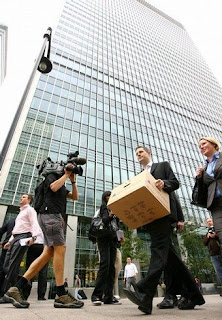 The curious task of economics is to demonstrate to men how little they really know about what they imagine they can design.
Friedrich Hayek

Is this Brian Lenihan's Lehman Brothers moment? Should he let Anglo Irish Bank fold or should he rescue it? Anglo has lost nearly 97% of its shareholder value since July 2007, leaving its share price at 38c on Friday. The market seems to have priced in a very, very bleak future for Anglo. Seems reasonable.

Since Anglo's shareholders have lost most of what they ever owned in the bank, their interests are secondary at this stage. Savers are already protected by the Government's guarantee scheme, so that just leaves employees and borrowers. The former are, I'm sure, already circulating their CVs to alternative employers. A wise course to follow. As for the latter, the question really is one of contagion. What happens to Anglo's borrowers and to the wider economy if Anglo goes under? To the extent that some of the loans are undoubtedly collateralised with other Irish (and non-Irish) financial institutions then there is a real risk of contagious defaults. Financial dioxin, if you like.

Certainly that tends to be the consensus on Lehman Brothers: in hindsight it would have been cheaper to prop them up, given the astronomical cost of the clean up once they went under because of the intricate linkages between Lehman and other institutions. Does the same apply to Anglo Irish Bank? Does Brian Lenihan feel lucky? Worse, because the Irish government has effectively underwritten Anglo and the other banks the international markets now see Anglo's difficulties as Ireland's difficulties. Here's David McWilliams in today's Sunday Business Post:

... in the past two months, the market’s perception of a sovereign default by Ireland has increased twenty-fold, while the banks individually have seen their default risk collapse. So, rather than the sovereign state bolstering the credibility of the banks, the banks have contaminated the creditworthiness of the sovereign! Had Lenihan moved quickly to recapitalise and had he swiftly fired the culpable, this might not have happened. Because we dithered, the market now sees that the guarantee was nothing more than an underwriting of bad bank behaviour and has reacted by transferring the liability of the banks onto the state.

Make no mistake about it; this trend is going to get worse, not better. If the minister prevaricates, he will simply undermine the ability of the state to borrow for hospitals, because he is trying to protect the banks’ boards and senior management most of whom are millionaires.

This really couldn't come at a worse time for the Irish Government. Global markets are increasingly wary of sovereign debt default risks and this in turn is limiting the room for manoeuvre of countries like Ireland. We don't want to be the next Iceland. Here's Willem Buiter's analysis:

For the first time since the German default of 1948, a number of countries in the north Atlantic region (North America and Western Europe) face a non-negligible risk of sovereign default. The main driver is their governments’ de facto or de jure underwriting of the balance sheets of their banking sectors and, in some cases, of a range of non-bank financial and non-financial institutions deemed too big to fail. Unfortunately, in a number of cases, the aggregate of the institutions deemed too large, too interconnected or too politically connected to fail may also be too large to save. The solvency gap of the private institutions the authorities wish to save exceeds the fiscal spare capacity of the sovereign.

The clearest example of the ‘too large to save’ problem is Iceland. Iceland’s government did not have the fiscal resources to bail out their largest three internationally active banks. The outcome was that all banks went into insolvency. The government then nationalised some key domestic parts of the three banks out of the insolvency regime, decided (under massive pressure from the British, Dutch and German governments) to honour Iceland’s deposit guarantees and left the rest of the unsecured debt to be resolved through the insolvency process.

Other countries face the problem of the inconsistent quartet ((1) a small open economy; (2) a large internationally exposed banking sector; (3) a national currency that is not a major international reserve currency; and (4) limited fiscal capacity). They include Switzerland, Sweden, Denmark and the UK. Ireland, the Netherlands, Belgium and Luxembourg have all but the third of these characteristics.

What is to be done? Curiously, none of the Irish banks wants to be 'rescued'. Not even Anglo. The state guarantee has bought them time to (sort of) get their house in order and to keep going until the economy improves in a few years' time. Sure, they won't have any money to lend, and their shareholders can kiss retirement goodbye, but their agenda is survival - not growth.

I am, frankly, of the opinion that it is not the job of the Irish government to save Irish banks from the consequences of their own mis-management. Moreover, if the banks don't want to behave like banks and lend money then they are, to use Willem Buiter's colourful phrase, as useless as tits on a bull. Keeping with the agri metaphors, I now reckon the Irish pigmeat industry is more important than some of the individual financial institutions in question.

What this means is that the government should not risk our credit worthiness on propping up worthless financial institutions. Let those that fail fail. Let the others (most likely AIB and Bank of Ireland) get on with surviving (and acquiring others that make sense - such as Irish Life & Permanent). But let's not pump taxpayers' money into businesses that have limited capacity to contribute to the growth of the economy for the foreseeable future.

Instead, I propose the government launches a form of the SSIA. In return for a guaranteed, tax free return over five years, Irish citizens would be invited to save regularly into SSIA type accounts. The money would then be used as a state-guaranteed fund for the purposes of business lending, especially to those in internationally traded goods and services. It should even be used to resource Irish businesses seeking to acquire businesses in the BRIC economies. The government should put the management of the fund for these purposes out to tender (all of it, or tranches) to the banks for a fee. Banks do know more about lending to business than politicians - a skill they will need to brush up on now that the property pawn broking model is finished. Loans would be repaid, of course, back into the fund. Any defaults (there would inevitably be some) should be made good by the government.

Just an idea: but one more likely to give Irish taxpayers (and future generations) a better return for their investment than what is being contemplated by Minister Lenihan right now.