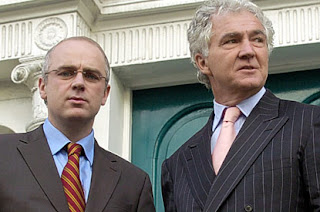 Accountability for the use of public resources is the first victim of a financial crisis. Willem Buiter

The Government has made me a part owner of Anglo Irish Bank. Gee thanks, just what I wanted for Christmas. The usual excuse of the potential for 'systemic risk' have been trotted out. As usual there is zero transparency about how much failure we are talking about. The quote from Buiter is more than apt in the circumstances.

How much am I now liable for (along with other citizen-taxpayers)? Anglo are reported as having liabilities in the order of some €100 billion. If 20% of that goes bad (the typical experience of US property busts on banks according to Morgan Kelly) then we're looking at writing off some €20 billion. That's equivalent to the Government's budget deficit this year. Kelly points out that 20% is the 'optimistic' scenario for Ireland.

It is extraordinary that a democratically elected Government is taking on these liabilities - which will have no benefits and only costs to the taxpayer - without any detailed explanation to its citizens of the origins, nature and scale of the risks involved. I guess the FT is right: this is how things fall apart.
Posted by Gerard O'Neill at Friday, January 16, 2009