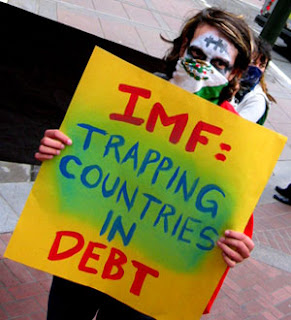 Yesterday's story about the IMF that wasn't had me wondering whether the clowns have taken over the circus? Seriously, this is not how you run a country plunging into a recession.

RTE's Prime Time show on the economy last night subjected us to a lot of inevitable doom and gloom, with a small crumb of hope to lighten the mood. The question that kept being asked was 'what should the Government do?' Everyone had a stab at an answer. But none gave the answer I'd give which is: 'put your own house in order and just get out of the way of the private sector'.

Remember, this is the Government that has brought us de-centralisation and electronic voting. The structure of government and the electoral process are areas they are directly responsible for. And they've made a mess of them. So why entrust the Government to do a better job in the areas it isn't responsible for: like delivering communications services, developing software, investing in manufacturing? They can't and they won't.

Which is why I have a problem with five year plans and such like (despite the calls of many of the participants in Prime Time for a plan). You can't 'plan' a modern economy: there are too many players, factors, barriers and unknowns in the way of any illusory attempt at describing a future path for the economy as a whole, let alone one that the Government will somehow deliver.

As I've said before, Government certainly has the capacity to harm the economy (taxes, regulations, monopolies) but its capacity to do good is enormously constrained. So I would like all politicians to take a version of the Hippocractic Oath: 'First, do no harm ...'

And maybe the folk in RTE should take it too, just avoid any more non-stories about the IMF and subsequent runs on the euro.
Posted by Gerard O'Neill at Thursday, January 15, 2009