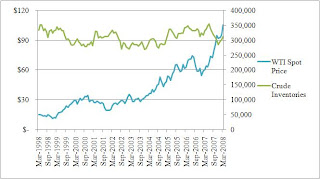 I keep ticking off the petrol price reductions as I drive around. The lowest I've seen - so far - is €0.94 a litre. Long may it continue. Though it won't.

The collapse in oil prices during the second half of 2008 caught everyone by surprise (including me: I switched to a diesel car in June on the strength of rapidly rising prices!). This means that we can expect to see continuing falls in the Irish (and EU and US) inflation rates right throught to the middle of next year and possibly beyond as year-on-year fuel price comparisons drag the headline index down.

But the other half of the oil price story is what happened in the first half of 2008: something like a 50% increase in the price of a barrel. What was that all about? Some of it was speculation - part of the great commodity blow out that eventually died during the credit crunch. But it wasn't all speculation: as Robert Murphy points out at the excellent MasterResource energy blog, a real speculative bubble would have sent supply and inventories soaring - but they didn't, as shown in the above chart from his post. So the collapse in price may well have been due to a plain old collapse in demand: further evidence of the economic whiplash the global economy experienced through the latter part of 2008.

But if he's right (and it makes sense to me), then even a weak recovery in the global economy in the latter half of this year (all those stimulus packages have to stimulate something) will cause a rapid reversal in the trend price of oil (and gas for that matter). Add in the horrific increases in money supply now underway and the scene is set for an economic flip flop from imminent deflation to nascent hyperinflation driven by the price of oil.

And it gets worse: we have witnessed unprecedented 'demand destruction' in relation to energy demand over the past six months. but the story not being told is that of 'supply destruction'. As Bob Hirsch (with whom I have worked) and Matt Simmons point out in a recent, fascinating debate on nearterm energy prospects, low prices have lead not only to the mothballing of renewable energy projects, but also to the mothballing of oil and gas exploration and development projects. So when demand does pick up, we won't even be able to get back to the status quo ante without a massive hike in investment ... and prices. Something tells me the Russians have spotted all this, hence their belligerence over gas to the Ukraine etc.

Like I said before, now's the time for the Irish Government to be locking in relatively low cost futures contracts for oil. And with wind power generation falling at times to less than 1% of installed capacity (as it did at 15.45 on 4th January just past), we need to rapidly source fully dispatchable power generators. I wonder are there any decommissioned nuclear submarines or aircraft carriers on eBay we could plug into the grid ...?
Posted by Gerard O'Neill at Wednesday, January 07, 2009