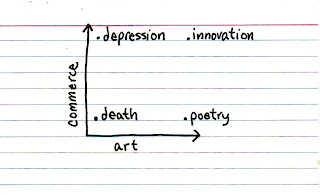 I was on Newstalk Radio's Down to Business show with Mark Mortell earlier. We talked mostly about consumer debt and spending - and the prospects for the latter in the year ahead. It struck me afterwards that recession and recovery have one thing in common: we usually only know they have started after the fact. So I suspect we'll be talking about the prospects for recovery for some time after it has actually started. Not that I think we're there yet: not by a long shot.

Of course, we are at a different stage in the economic cycle. And so we are experiencing a different set of emotions, individually and collectively. Some emotions are social: they are heightened by the company of others. Fear is a social emotion; whereas hope tends to be independent of others. For that reason the story of recovery is a microeconomic story in the main. Recovery will arise from the discrete decisions and actions of thousands of business people, entrepreneurs, bank managers and workers deciding they are hopeful for the future and prepared to take the risk of borrowing/lending, investing and hiring to meet the needs they foresee. It is not up to Government or economists or the Social Partners to bring about growth: they just have to get out of the way of those who will.

Nevertheless, it is usually the case that one sector or another leads the recovery. It is certainly the case that different technologies have emerged out of recessions in the past and thrived in the boom that followed. Colour television thrived during the oil crisis in the 1970s; VCRs during the turbulence of the early 1990s. Mobiles boomed after the dot com bust. The obvious candidate this time round is gaming. Deloitte have reported that a quarter of all UK households own a Wii gaming console: and the same proportion again intend buying one over the next year. The trend is lead not by teenagers but by families and silver gamers. The result, according to this stunning presentation, is that gaming is bigger than movies, DVDs, music and books combined. I'm still trying to get my head around that.

Ireland is well placed to benefit from this trend. The little image above from the delightful Indexed captures it well: innovation is a fusion of commerce and art. We can be world class at both. And as I've said before (quoting Oscar Wilde) the future is what artists are - there's something to be hopeful about.
Posted by Gerard O'Neill at Saturday, January 10, 2009