A Great Future Behind Us 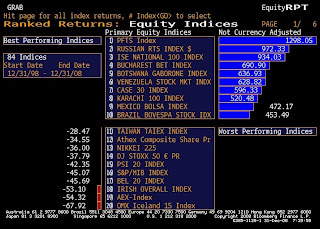 The euro is ten years old today. Happy birthday. Looking back we're bound to ask: was it worth Ireland's while joining the eurozone? The euro-sceptic Daily Telegraph thinks it's too early to tell, though the current pound/euro exchange rate still can't tempt them to join. Just as well for Irish exporters really ...

Sure, membership of the euro has protected us to a degree from the fate that has befallen Iceland (so far) - but then again, if we hadn't been in the eurozone it is unlikely we would have experienced the property bubble that is still dragging down the economy. What about other benefits of euro membership? We were lead to believe that a greater integration between the Irish and other eurozone economies would provide a significant boost to investment, employment and wealth. The evidence suggests otherwise.

Take the chart above (ht Infectious Greed): whilst recent headlines reported the ISEQ falling by 66% in 2008, the longer term trend is much, much worse. Irish equities have been the second worst performing in the eurozone, down 54.3% over the decade ending yesterday. Only the Dutch have fared worse in the eurozone; and as for Iceland ...

This might not matter if Irish investment fund managers has availed of the euro opportunity and diversed massively out of Irish equities. But they didn't. Therein lies a story of criminal negligence. As Charlie Fell put it recently in The Irish Times:

The performance record of our finest investment managers over one, three, five and 10 years can be described as nothing less than dreadful. They walked your money into a severe bear market not once but twice in just eight years. They ignored the lessons of history and the ferocity of a secular bear and they compounded the problem through the dismissal of cyclical indicators that warned of impending trouble a year ago.

Charlie calls for heads to role - I'd go further: let's shut down the ISEQ and give it a decent burial. We have a stock market that is unfit for purpose: let growth-minded Irish businesses raise money in the UK, French or German stock markets. And let's ensure that no future generation of Irish pensioners and investors are ever again lead to the financial slaughter by self-serving, lazy Irish investment 'managers'.

All that said, I am still a fan of the euro and Ireland's participation in the eurozone. We may now be a nation with a great future behind us, but the economic potential for the eurozone still exists. I believe the euro can provide the foundation for a single market driven by free trade between citizens and companies, creating employment and wealth for all of Europe's citizens. But it is only the foundation - the walls and ceiling will have to come from a genuine commitment to reducing the barriers to trade, investment and growth within Europe. And a start might be to look anywhere but the ISEQ for investment opportunities in the year ahead.
Posted by Gerard O'Neill at Thursday, January 01, 2009