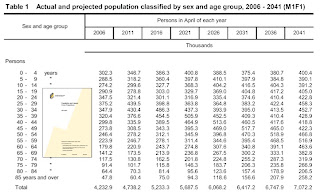 Our children now love luxuries. They have bad manners and contempt for authority. They show disrespect for elders and they love to chatter instead of exercise. Children are now tyrants not the servants of their households. They no longer rise when elders enter the room. They contradict their parents, chatter before company, gobble up their food and tyrannise their teachers. Socrates, 425BC

IKEA may have a better sense of our long term prospects than most economic commentators right now. The news that they are opening their Dublin store in July is welcome news for their target market. Not me, I might add.

But in light of the sharpest decline in retail sales volumes in 25 years, their timing might seem a bit off (especially as furniture sales are down 27% pdf). Though I don't think so. Why? It's all down to our demographic destiny. The fastest growing demographic groups in Ireland over the next twenty years will be 30-somethings and 40-somethings (see table from last year's CSO population forecast report). As I've noted before, we actually have one of the more benign demographic outlooks of all EU countries.

The point about the middle-ageing of Irish society is that these are the groups usually enjoying rising incomes and with a higher propensity to spend to boot. And as a recent Harvard Business blog post noted, the trend in consumer market growth rates is strongly tied to the share of 40-somethings in the total population. It also means we're about to have a baby boom in Ireland - with the number of births set to rise every year for the next ten years.