Is The Pope a Capitalist? 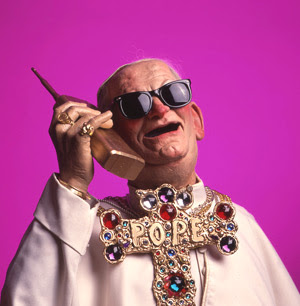 Fresh from upsetting everybody with what he didn't say about gays (has ever so much been written by so many about so little?), the Pope has taken the even more unpopular step of coming out and defending capitalism. In his New Year's Day speech on world peace, Pope Benedict XVI had this to say about the solution to world poverty:

Investing in the formation of people and developing a specific and well-integrated culture of enterprise would seem at present to be the right approach in the medium and long term. If economic activities require a favourable context in order to develop, this must not distract attention from the need to generate revenue. While it has been rightly emphasized that increasing per capita income cannot be the ultimate goal of political and economic activity, it is still an important means of attaining the objective of the fight against hunger and absolute poverty. Hence, the illusion that a policy of mere redistribution of existing wealth can definitively resolve the problem must be set aside. In a modern economy, the value of assets is utterly dependent on the capacity to generate revenue in the present and the future. Wealth creation therefore becomes an inescapable duty, which must be kept in mind if the fight against material poverty is to be effective in the long term.

President ('consumed by consumerism') McAleese please note. The Pope's remarks in favour of capitalism failed to excite quite the same level of vitriol this time: sure what's world poverty compared to the 'big issues' like gay marriage? But they are welcome nonetheless, as we can expect to see too much emphasis on 'mere redistribution' rather than wealth creation as our politicans get the Keynesian bit between their teeth. Which is perhaps where the Pope needs to go next: and start challenging the limits of politicians and governments to interfer in people's lives. He could do worse than to start with Willem Buiter's own 'New Year message' in a recent blog post when he observed that:

Every restriction on our liberties - our right to speak, write, criticize and offend as we please, to act and organize in opposition to the government of the day, to embarrass it and to show it up by forcing it to look into the mirror of its own leaked secrets - must be resisted. We cannot afford to believe any government’s protestations that it is acting in good faith and will safeguard the confidentiality of any information it extracts from us. Public safety and national security are never sufficient reasons for restricting the freedom of the citizens. The primary duty of the state is to safeguard our freedom against internal and external threats. The primary duty of an informed citizenry is to limit the domain of the state - to keep the government under control and to prevent it from becoming a threat to our liberties.

Of course, to go there the Pope would have to rescind the ludicrous doctrine of Papal Infallibility 'invented' in the late 19th Century if he really wants to defend freedom (and peace and prosperity). As the doctrine's greatest critic at the time, the Catholic Lord Acton observed: 'Power tends to corrupt, and absolute power corrupts absolutely'. That's something to pray for.
Posted by Gerard O'Neill at Monday, January 05, 2009