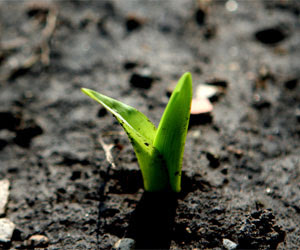 Unlike bad weather, recessions are man-made phenomena and so they don't just end by themselves. Nevertheless this recession will end: though maybe not in the same way as others have in the past. There is a considerable body of economic literature on the causes of recessions and depressions, booms and busts. The literature on recovery from recessions is a lot thinner (other than a number of studies analysing the typical pattern of recession/recoveries). Typical is this study of the pattern of macroeconomic indicators preceding the end of the recession, which suggests that it really is darkest before the dawn (of recovery).

I think one explanation for the absence of an extensive economic literature on recovery is that recessions are a driven by macroeconomic phenomena in the main, whereas recoveries are driven more by microeconomic phenomena. It is the decisions that go on within businesses and households that determine the timing, nature and scale of recovery - but these decisions don't lend themselves well to macroeconomic modelling.

This analysis from the Heritage Foundation makes much the same point:

Focusing on demand in this way is like focusing on the sound of one hand clapping. The other hand is supply, and that is where the economic action really is. There are normal processes that launch a recovery and drive an economy. These processes involve individuals and businesses responding to opportunities and incentives. When they respond, these individuals and businesses produce more goods and services valued in the marketplace, simultaneously increasing production, demand, and income. An effective stimulus policy recognizes these economic processes and seeks to accelerate them. Lower marginal tax rates stimulate the economy because they improve the incentives facing individuals and businesses to work, invest, take risks, and seize opportunities.

So how might recovery come about for Ireland? We can't ignore the macroeconomic picture of course. Low interest rates and low (or negative) inflation will reduce the cost of doing business and increase the spending power of consumers. But plainly these are not enough on their own. Taking a cue from the Heritage quote above, recovery will also require a number of other factors to be in place, including:
But I think we need to go further. We need a different type of recovery process for a different type of recession (one whose principle cause was a banking crisis rather than a cyclical downturn in trade on its own, though we're getting that as well now). I'm calling it Recovery 2.0, which like the eponymous Web 2.0, points to a new paradigm in how we can and should go about facilitating recovery this time round.

Recovery 2.0 is aimed at the Facebook generation: those 20-35 year olds who are now experiencing their 'first recession'. They intuit better than most the potential for the web to facilitate their personal responses to recession including:
Recoveries like recessions are usually under way long before they appear in the official data. So will the forthcoming recovery. But it will be different from the past. I foresee a combination of orthodox factors (falling costs, rising confidence) and unorthodox factors (Web 2.0 applied to innovation) putting us on the road to recovery. While there is much outside of the control of those of us in Ireland (Government, businesses and citizens), there remains much that is in our control. By working harder and working smarter we can the leverage we've got to get us on the road to recovery sooner rather than later.
Posted by Gerard O'Neill at Sunday, January 18, 2009