Send In The Economists 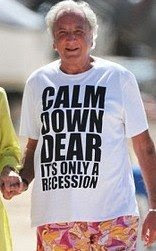 I was at the Responding to the Crisis conference this afternoon - organised by UCD and the Dublin Economic Workshop (papers at the conference site). Well done everyone involved in organising it.

Two things struck me about the various contributions: 1) there was a lot of hindsight wisdom in the analyses; and 2) the consensus is that things will get a lot worse, and possibly go way beyond worse. The contribution from Morgan Kelly easily won the Nouriel Roubini Prize for gloomiest presentation (with talk of 80% house price falls and Anglo/Irish Nationwide stiffing the Irish taxpayer for €30 billion).

On balance there wasn't that much 'Response' in evidence from the bulk of the contributions. Instead there was too much diagnosis, a modicum of prognosis and not enough prescription. A pity really. I only hope the organisers are planning a sequel using open space technology or similar to get the collective inputs of the 200 attendees next time round. And way less PowerPoint.

It is clear, nevertheless, that we have a massive task of de-leveraging ahead of us Ireland. Though unlike the global financial markets, as Patrick Honohan reminds us, we are dealing with the blow-out from a plain old-fashioned credit boom. The danger is that, in responding to the bust, we might make it drag on longer than necessary, as he concludes in his paper:

... much of the current global rethinking of regulatory design will not necessarily be particularly relevant to the Irish scene: the Irish problems relate to a very old-fashioned credit boom and not to financial innovation. The failure was one of insufficient scepticism on the part of the regulator. With hindsight, it seems evident that the Regulator should have insisted on much more pessimistic loan-loss provisioning on developer loans. The adjustment to capital requirements for high LTV residential mortgages should have been much higher. Beyond that, the danger to be avoided now is that the Regulator might be inclined to impose requirements that discourage exactly the lending that is needed to protect the economy through the downturn and position it for a recovery.

Horse-stable-bolted. But he's right: we don't want to shoot the horses that are left to in order to punish the ones that got away.

Amidst the doom and gloom there was little in the way of hope. But not everyone is quite so despondent. There are some who think the global recession might be over sooner than we think (same as my point in a recent post that the recovery will be under way before most economists realise it). But even if the end (of the recession) isn't quite nigh, we need to be grown up and remember that all recessions all come to an end because that's the way capitalism works:

We are constantly being told that the current economic problems are akin to the Great Depression, or that credit crunch was as significant a blow to capitalism as the fall of the Soviet Empire was to communism. But these things are simply not true. Unemployment isn't going to reach 25 percent. People aren't going to starve. The stock market is going to recover. And capitalism itself isn't going anywhere.

Whatever happens, people will continue to make things, sell things, and buy things. People will continue to innovate, and others will continue to invest. Free exchange will go on. And that, ultimately, is what capitalism is. It isn't a system or a structure like the planned Soviet economies. It is a collection of free individuals pursuing their interests, and that's what makes it so dynamic and resilient. It might take time, but markets adjust, and ordinary service is resumed.

Maybe we should issue every Irish economist with a Michael Winner t-shirt?