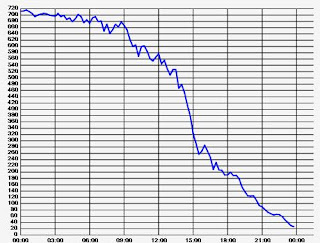 What is it about 3rd January? This day last year saw wind speeds drop to near zero across Ireland, with a resultant drop in electricity output from wind generation - as the chart shows. The same thing seems to be happening again, as reported by EirGrid.

It doesn't matter of course so long as we have back up generation ('fully dispatchable' to use the jargon) in the form of gas and coal fired power plants. The problem is that we are winding down our fully dispatchable generation capacity whilst winding up our non-fully-dispatchable capacity. The sort that only works when the wind is blowing ...

Here's what EirGrid has to say about wind in its latest Generation Adequacy Report (pdf):

In the last number of years there has been a rapid increase in installed WPG. Installed capacity has grown from 145 MW at the end of 2002 to the 920 MW as of 1 September 2008, with a further 1457 MW committed to connection.

... There remains very significant interest in the development of further WPG. Beyond committed projects, there is a 168 MW tranche of wind capacity being progressed under the Connection Offer Process. There are approximately 7 GW of wind applicants awaiting a connection offer. At the time of writing, the CER had published a proposed direction paper directing the system operator to process 3,900 MW of wind as part of Gate 3. This is in addition to a significant amount of conventional generation that is expected to be part of this Gate process.

... energy supplied from WPG has increased in recent years. In 2002, just 1.6% of Ireland’s electricity needs came from WPG. Despite rapid electricity demand growth in the interim period, at the end of 2007 the share provided by WPG, (of a larger demand figure), had grown to 7.1%. 2007 was considered to be a “poor” wind year in terms of nationwide average wind speeds. From consultation with industry it was found that this below average wind speed is within expected wind speed ranges. Wind conditions seem to be recovering so far in 2008.

These are extraordinary numbers - and paint a worrying picture given the Government's ideological goal of generating 33% of electricity from renewables by 2020. According to EirGrid, current projections estimate that 4371 MW of wind and other renewables would have to be connected by 2020 to meet the 33% target. This would rise to 5405 MW to achieve a 40% target in 2020. Mostly from wind - which tends not to blow a lot this time of year.

Still, there'll be a big market for woolly jumpers - assuming there are any retailers left to sell them ...
Posted by Gerard O'Neill at Saturday, January 03, 2009