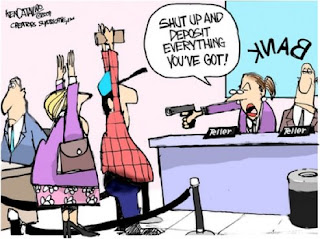 What on Earth are the Government thinking with their half-a-solution approach to the problems of the Irish banking sector? As David McWilliams points out: the €7 billion now being mooted as the value of the taxpayers' 'rescue' of the main banks will not cover the bad debts.

Worse, it rules out other, potentially viable options and paints us into a corner. Here's Buiter's perspective:

The US, the UK and several other continental European countries are at risk of emulating Ireland, where the government first guaranteed all the liabilities of the banks (other than equity) and only after that began to nationalise the banks. This leaves the Irish government today in the not too enviable position of having to choose between sovereign default and bleeding the tax payer and the beneficiaries of normal public spending to make whole all the creditors of the banks.

Bailing out the holders of existing bank debt and other bank creditors would be outrageously unfair: they did the lending and made the investments, they should eat the losses. In addition, many of the creditors are likely to be much better off, even after they write down/off their claims on the banks, than most of the tax payers and public expenditure beneficiaries that pay for the bail out. Bailing out the existing creditors would also create dreadful incentives for excessive future risk taking by banks.

A kind of 'pay lots now, pay even more later' solution. Why is this happening? A 'consensus' that leaves all the original parties to the catastrophe in situ without consequences is an extraordinary outcome. Perhaps Robert Higgs is right when he laments that we are witnessing the emergence of participatory fascism:

The hallmarks of this system are, on the political side, the trappings of democracy (parties, elections, procedural niceties, etc.), and, on the economic side, the form of private property rights (though not much of the substance that characterizes the real thing).

The beauty of this system is that the political system can easily be corrupted so that the power elite retains a firm hold on the state, despite the appearance that they rule only with the consent of the governed.