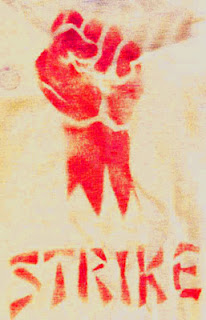 Finally the proletariat have thrown off their shackles, got up off their knees and struck a fatal blow to ... social welfare recipients. The CPSU's one day strike today was an utter disgrace: a sickening spectacle of people in secure, pensionable, state-guaranteed jobs denying access to benefits to the most vulnerable groups in society. And our supine, spineless, gutless politicians didn't so much as raise a peep about it.

Is this Social Partnership's legacy: civil servants beating up on the unemployed whilst purse-lipped politicians look the other way? Seriously: did a single elected representative condemn this? Or are they all, miraculously, from constituencies that don't have social welfare recipents? For that matter, where are CORI Justice when you need them? There should be a revolution all right: by those same sad people now dependent on the whims of sinecured civil servants for the money to get by one week to the next.

Still, RTE did report that not all social welfare recipients were affected:

However, the 64 branch offices operated by private contractors were open, allowing the unemployed who normally use them to sign-on and to avail of other services.

I wonder can I persuade CORI to demand the privatisation of the remaining state-run social welfare offices? In the name of social justice for welfare recipients of course. Or are they too tightly held by the shackles of Social Partnership? Think I know the answer to that one ...