The Economics of Envy 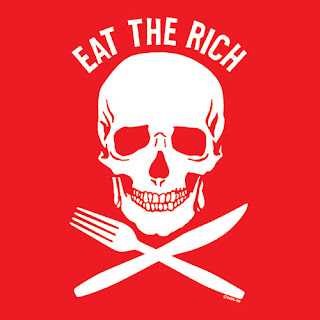 The Labour Party have finally, finally told us how they'll sort out the Government's budget shortfall. They're going to make the landlords pay for it. As reported in yesterday's Irish Independent, the single largest element of their alternative scheme to the pensions levy is to abolish the €800 million interest relief on rental properties availed of by Irish landlords. The rest is window dressing (tax the 'tax exiles' etc).

As always with such ideas, the intention is to imply that "we just need to tax the greedy rich folk who got us into this mess" and all will be well again. The Irish Congress of Trade Unions are at it as well with their 10 Point Plan for National Recovery:

The failed policies of letting the wealthy off the hook, while forcing working families pay for the crisis, has already led to a slump in consumption unparalleled elsewhere in Europe. Retail sales in Ireland have been falling at an annual rate of 8 percent, as compared with the EU average of one to two percent. Recent VAT increases have exacerbated the problem.

What the first sentence means, let alone what it has to do with the second sentence, is beyond me. Sadly we are being treated to the same sorry spectacle of people with vested interests wanting to hurt other people's interests rather than face up to their own part in the crisis. Take the landlord solution from Labour. Only a tiny minority of people live off rental properties - I reckon as few as 5% of the adult population. If you end up making it more expensive to be a landlord (on top of the tax on second homes recently introduced) then they're going to cease to be landlords and just dump their properties on the market. One of those 'unforeseen' consequences I guess, just like the recent collapse in tax revenues from the sale of cigarettes (which plunged as smokers reacted to the October budget increase in taxes by shopping across the border).

The same goes for 'taxing the rich'. The problem is: there just aren't enough of them. The latest Revenue Commissioner statistics on incomes (pdf) from 2005 - they'll have risen somewhat and fallen back somewhat since - show (page 6) that 4% of adults earn over €100,000 - and they already contribute 39% of income taxes.

The economics of envy now being touted by people who know better simply won't get us anywhere in terms of solving the real economic problems that we now face.
Posted by Gerard O'Neill at Sunday, February 15, 2009