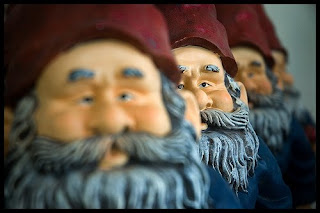 I'm in Zurich for a couple of days, looking for gnomes. It is a fascinating city: about twice the size of Cork and twice as wealthy as the whole of Ireland. It's the only city I have ever been in that didn't have beggars. Literally none. A sign of affluence or a sign of strict policing - I'm not sure (though I haven't seen any police either, come to think of it).

It is a quintessentially bourgeois, European city - I had coffee earlier in the delightfully old world Cafe Odeon, a regular frequent of comrade Lenin in his day. He had good taste, I'll give him that.

One thing Switzerland brings home is the difference between income and wealth. On a GDP per capita basis, Ireland enjoys a higher income than Switzerland. On a wealth per capita basis we don't even come close. A short stroll along the shoppers' paradise (for those who follow that, er, 'faith') of the Bahnhofstrasse quickly brings home just how much wealth there is in this city. Even Celtic Tiger Ireland as its most bling could not come close to the range of designer shops on display, with the occasional, far more subtle private bank mixed in for good measure. This is the product of many centuries of hard work, capital accumulation, free markets and smart institutions.

The result is that Switzerland looks set to enjoy a 'good recession': GDP is expected to contract slightly this year by -1.2% and grow next year, whilst consumer spending is expected to continue to grow (just as well for the Bahnhofstrasse). It is a country relatively insulated from many of the world's troubles: whether financial (the Swiss Franc remains relatively strong, thanks to all that gold in the vaults I suspect), or environmental - with 95% of its electricity coming from hyrdo and nuclear power they needn't worry too much about oil prices either.

That's enough for now: I feel a coffee and chocolate from Cafe Sprungli calling. Auf wiedersehen.
Posted by Gerard O'Neill at Monday, February 16, 2009