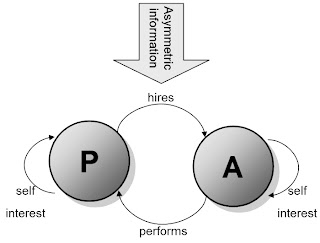 Daniel Kahneman (the man Nicholas Taleb says was the only man who ever deserved a Nobel Prize for Economics), explains the Credit Crunch partly in terms of the Principal-Agent Problem, or 'Agency Problem' as it is usually know. He points out that the incentive structure in investment banks etc led traders to take huge risks from which they stood to gain but never lose. The result, when the losses rolled in, was that they headed to the beach to spend their bonuses while their employers filed for bankruptcy.

The Agency Problem is not exclusive to investment bankers of course. Whenever you are required to 'employ' others to act on your behalf (brokers, estate agents, politicians) you are massively vulnerable to the Agency Problem. As most pension holders are discovering as the dismal news about their funds arrives through the letter box.

Plainly the Agency Problem is not just a private sector phenomenon. After all, a Representative Democracy is - by definition - one characterised by a Principal-Agent relationship. You're the Principal, just in case you were wondering. Our elected representatives are our Agents - there to act in our interest, not their's. And therein lies the problem. Most Agents (private or public sector) generally know more about their specialism than the Principals: which is why we entrust our pension contributions to the experts (or used to).

The same applies to our TDs - they understand the political system way better than any private citizen, who simply doesn't have the time to figure it out for themselves. The problem is, you often end up with political representatives who are good at politics: but not especially good at running the country. As John Crown put it eloquently in yesterday's Sunday Independent:

At the core of our public governance is a dysfunctional interface between inexpert ministers and senior civil servants who have generally risen to the top of their departments on the strength of their adroitness at navigating its bureaucracy. The ministers are unfortunately drawn exclusively from a cohort of generally mediocre, frequently nepotistic TDs, whose entree to national politics was based not on a grasp of the big issues of state, but on their ability to manipulate a local constituency party machine. These observations explain the now-exposed incompetence of our Government, an incompetence which was obscured from our view by the Celtic Bubble. Please contrast this with the Obama cabinet. Current energy policy will be one of the key determinants of the future of our society. Who did the President appoint as energy secretary? A Nobel Prize winning physicist! Given the pool of talent available in the Dail, that could never happen here.

Ireland is now suffering spectacularly from the Agency Problem. The people we have put in government to act in our interest over the past fifteen years or so have plainly failed to do so. We are now reaping the consequences. Worse, they have even proceeded to sub-contract huge swathes of their responsibilities to other Agencies in turn. An Irish solution to an Irish Agency problem indeed.

The response on the Left tends to be: 'if only our guys were in power then we'd implement the right policies'. The dismal failure for this rosy scenario to materialise anywhere, ever does not dissuade them from their utopian ambitions. I wonder then could we reach a Left-Liberaltarian compromise and go for a form of small government egalitarianism? Short circuit the Principal-Agency Problem by giving more power to the Principals (i.e.: the electorate, taxpayers, citizens etc), and significantly less to the Agents (politicians, civil servants, quangos etc). Let's concentrate limited, taxpayer funded resources on those end recipients who need them most, and empower citizens to look after their own affairs as best they can when they can.

As Aristotle observed (taking an oblique swipe at Plato):

What is common to the greatest number gets the least amount of care. People pay most attention to what is their own: they care less for what is common; or, at any rate, they care for it only to the extent to which each is individually concerned. Even when there is no other cause for inattention, people are more prone to neglect their duty when they think that another attending to it . . .

Looks like the Agency Problem is a very old one indeed.
Posted by Gerard O'Neill at Monday, February 02, 2009