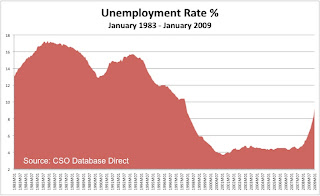 With the unemployment rate now back to where it was in late 1997, there is one thing we can be sure of: a rising demand for foreign workers to leave Ireland. The ugly genie of xenophobia is being unleashed across Europe - as evidenced by the recent protests against foreign workers in the UK.

Nearly one in five unemployed workers in Ireland (18.6% in December pdf) are foreign nationals. Over half of these are EU accession country citizens (Poland etc), while the second largest group are English. Fewer than a fifth of foreign nationals signing on the live register in Ireland are non-EU citizens. Bottom line: they are mostly entitled to be here under EU law.

Even if that wasn't the case, would a demand for 'Irish Jobs for Irish Workers' (paralleling Gordon Brown's disgraceful call for the same for British workers) make a difference? Absolutely not. As socialist commentator Chris Dillow has noted about the UK protests:

1. A survey (pdf) by Christian Dustmann and colleagues shows that there is no evidence that immigrants reduce British wages on average. Yes, there’s pressure on unskilled wages. But this is offset by higher wages for more skilled workers.
2. David Card estimates (pdf) that the effect of recent immigration upon relative US wages has been “small”.
3. A survey of the impact of migration from new EU member countries to older EU countries finds that “any negative effects in the labour market on wages or employment are hard to detect.”

As he goes on the explain in a subsequent post:

The global recession is raising demands for protection against free trade. This is illogical. The question: does free trade hurt workers relative to some set of protectionist policies? can be answered independently of the state of the business cycle; it’s not the case that free trade is good in a boom but bad in a recession. The recession is just raising the salience of the gross losses from free trade; it’s not systematically affecting the net gains.

In other words: a rush to the protectionist doors in labour markets as in trade will damn us to a far longer and deeper recession than would otherwise be the case. Moreover, foreign workers are by definition more mobile than their indigenous counterparts - here in Ireland Constantin Gurdgiev estimates that two foreign workers are leaving for every one signing on the live register. The 'problem' of unemployed foreign workers is self-correcting in the main.

Sadly this has not stopped the Party of European Socialists demanding greater labour market controls in the EU, aided and abetted by trade unions. They really should know better, but there you go.
Posted by Gerard O'Neill at Thursday, February 05, 2009