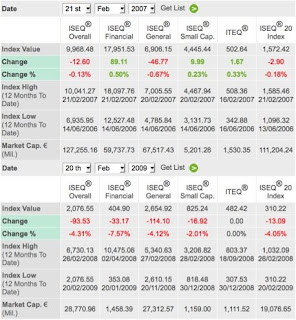 There are some things you only ever realise in hindsight: your success in your chosen career say, or the number of children you have, or your peak net worth. The same goes for countries. And so today is the second anniversary of our peak wealth as a nation: 21st February 2007.

The chart shows the summary ISEQ indices for yesterday and for two years ago. The contrast is extraordinary. In just 24 months the total value of Irish equities (owned by you and me directly or indirectly through our pension funds etc), fell by 77% - wiping out nearly €100 billion of wealth in the process. Most of that has come from the destruction of the banks: they have lost 98% of their value in the past two years.

As of yesterday the ISEQ was back to the value it last had in 1995: fourteen years ago. We have witnessed a scale of wealth destruction that could only be exceeded by a military invasion. In truth, I don't expect to see the levels of the wealth we had two years ago again in my lifetime - nor that of my children. Welcome to Collapsistan, we are all Collapsitarians now.
Posted by Gerard O'Neill at Saturday, February 21, 2009