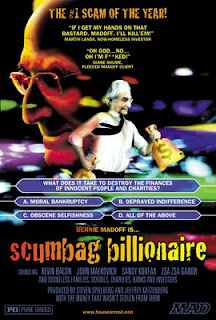 If you're not at the table, you're on the menu. Anon

A friend recently predicted that up to half of all the architects that he knows will be redundant by the summer. We are in the grip of an equal opportunity recession: no sector, region nor social class will escape it. Especially the middle class: if anything, they are the ones who will take the brunt of this recession, especially (make that exclusively) those working, or previously working, in the private sector. This is Ireland's first middle class recession - which is why it is going to be a deep one.

The middle class is the economic, cultural and moral backbone of any nation. They also pay most of the taxes. That is why Russia and China so earnestly want their societies to become middle class. But the great weakness of the middle class is their lack of a shared identity and voice. They are not represented in the social partnership talks (we don't have a Taxypayers' Union in Ireland).

But they will find their voice. The United States is wakening up to the one thing that is worse than a sub-prime mortgage crisis, i.e.: a middle-class mortgage crisis. Here in Ireland are we witnessing the unprecedented destruction of the wealth of the middle class in terms of their home equity values, pension values, and lifetime earnings capacities. Just as the Government has been caught off guard by the speed and scale of the rise in unemployment (throwing all their social welfare spending projections out the window); so also will they (and the banks) be caught off guard as the same banks they are putting taxpayers money into face widespread mortgage defaults by former members of the middle class.

It is a tragic outcome: gross mis-management of the nation's government and economy have destroyed more wealth than any other event short of war. Over the years, the kleptomaniacs in various governments and financial institutions have become parasites that are now eating the host. Here's Willem Buiter on what has happened in the USA and UK:

During the decade leading up to the crisis, current account deficits increased steadily and became unsustainable. Strong domestic investment (much of it in unproductive residential construction) outstripped domestic saving. Government budget discipline dissipated; fiscal policy became pro-cyclical. Financial regulation and supervision was weak to non-existent, encouraging credit and asset price booms and bubbles. Corporate governance, especially but not only in the banking sector, became increasingly subservient to the interests of the CEOs and the other top managers.

There was a steady erosion in business ethics and moral standards in commerce and trade. Regulatory capture and corruption, from petty corruption to grand corruption to state capture, became common place. Truth-telling and trust became increasingly scarce commodities in politics and in business life. The choice between telling the truth (the whole truth and nothing but the truth) and telling a deliberate lie or half-truth became a tactical option. Combined with increasing myopia, this meant that even reputational considerations no longer acted as a constraint on deliberate deception and the use of lies as a policy instrument.

He might as well have been writing about Ireland, so close does his analysis follow our own sad demise. The nature of the middle class is to sacrifice now (deferring consumption, paying for their children's education, investing in a pension) in order to enjoy a free and independent life in the future. Those who have stolen that future will pay a savage price for their thievery.
Posted by Gerard O'Neill at Friday, February 06, 2009