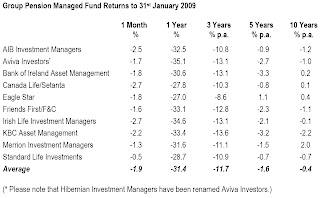 If you started contributing to an Irish pension in the past ten years then I offer you my commiserations. As the chart shows - from data published today by Rubicon Investment Consulting - the average Irish pension fund has, on average, lost 0.4% per annum since January 1999. They have lost 31% in just the past twelve months. Listen out for the howl of anger as the pension contributors of Ireland - the New Poor - read their annual statements arriving in the post over the coming weeks. Nor will there be much consolation in knowing that the present crisis has destroyed 40% of all the world's wealth so far - and it isn't over yet.

Though many will see the levy on the public sector as - effectively - a pay cut of up to 10% for those on the highest salaries, it pales beside the 100% pay cuts being imposed on thousands of private sector workers every week in the form of redundancy and unemployment. And that's the good news for public sector workers: no redundancies - the right decision in the circumstances (and one I predicted last July).

Nevertheless today's announcement by the Government still leaves the public sector with index linked, taxpayer guaranteed pension entitlements that are striding in the opposite direction to that of private sector pensions right now. The debate on how best to resolve what some in the UK are calling Pensions Apartheid (pdf) has still to be addressed. It won't be this year, nor maybe next, but social justice for private sector workers demands that it eventually must be addressed.

We're assuming, of course, that public sector workers will simply go along with the Government's plans without recourse to industrial action. Perhaps - though I wouldn't bet on it. The reality is that the public sector in Ireland lives in a world in which there are effectively no economic consequences for their actions - one reason why ICTU (and especially the public sector unions that dominate it) preferred to say 'no' than reach a deal. Ironically I expect that the biggest victims of the demise of Social Partnership will be the trade unions. Only 20% of private sector workers are members of trade unions (a proportion probably declining as the industries in which there are organised are among those contrasting fastest). It looks like the Left will have to figure out a new role for unions - and fast.

There is one that I see for them (genuinely): as lifetime coaches, trainers and income insurers for employees who will have to change jobs more often. They might even do a better job as pension advisers and managers. But that may be a 21st century bridge too far for organisations sadly moribund in 19th century practices.
Posted by Gerard O'Neill at Tuesday, February 03, 2009