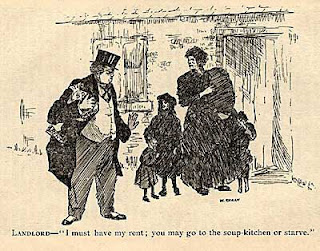 We Irish have always had a bit of a 'hate-hate' relationship with landlords down through the centuries. When they weren't busy extracting what little surplus impoverished tenants could generate from meagre crops, they were of squandering their ill-gotten gains as absentee landlords back on the mainland. We're barely over it, come to think of it.

That's why it's easy for the likes of the Labour Party to demand that landlords contribute the bulk of the tax increases necessary to close the Government's budget deficit. Who could object - sure haven't they been bleeding the country dry for neigh on 700 years and more?

Unfortunately it's not that simple. As I point out in a commentary on the latest Daft.ie quarterly rental market report, a great many more of us are about to become tenants due to the fall out from the recession. And most won't be going back to home/mortgage ownership for some time to come. The 'mort' in mortgage is from the French for 'death', and we are now seeing just how deadly an obsession with home ownership can be for families, economies and entire nations.

Not all nations share the same obsession. I was struck by the reference in one of the guide books during my recent trip to Zurich that some 95% of city inhabitants are in rented accommodation. Even though house and apartment prices appear to be considerably less than in Dublin. No wonder their economy looks set to get through the global recession relatively unscathed.

Most comparative analyses (such as this pdf) show that the two (obvious) drivers of housing tenure profiles in most cities and countries are 1) the relative price of renting versus owning, and 2) the impact of regulation on rents and house prices. The continuing uncertainty in this country about the future environment for renting (especially if you are a landlord) does not bode well for any kind of smooth transition from a nation obsessed with owning homes to one with better things to spend their money on (before they die, that is).
Posted by Gerard O'Neill at Tuesday, February 17, 2009