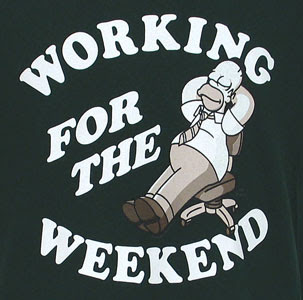 Monday: only five more days 'til the weekend. I remember suggesting a few years ago to a director in IBEC that instead of negotiating pay rises through social partnership, IBEC should negotiate a four day week instead. I reckoned that if we added 3-4 new bank holidays each year for the next ten years we would effectively end up with a four day week. Sadly they went for benchmarking instead ...

As I've noted before, our notions about the normal flow of the seven day week are changing all the time (see Saturday is the new Sunday). One outcome of the Great Recession we are now living through will be a very different social contract in relation to the working week. Not just because of rising unemployment, but also because of the unilateral introduction of shorter working weeks, salary cuts and compulsory holidays by a growing number of businesses (and, before too long I expect, by the public sector).

As Patrick Collinson noted in Saturday's Guardian, the hard distinction between weekday work and weekend leisure only became predominant during the heyday of American industrialisation under Henry Ford. But we now live in a predominantly services economy. Much office-based work (though not all) could be managed on a four-day basis: it already is every time we have a bank holiday. It would simply represent the further maturation of our civilisation, as we reap the rewards of the free market economy not in more stuff but in more time. Acton Institute's Michael Miller puts it eloquently:

The goal of economic liberty is not a society of producers and consumers in equilibrium. Economic liberty is important because it creates space for people to live out their freedom, take care of their families, and fulfill their responsibilities. Economic freedom is necessary because it allows people to take risks and create material prosperity for a flourishing life. Economic liberty is needed because without it there can be no political liberty. Both require individual virtue and a moral culture for sustenance. Neither an adolescent culture following its whims, nor a soulless culture severed from its historical roots, from the sacrifices and struggles of our fathers whose spirit and dedication to freedom made it possible, is adequate.

Living out our freedom includes being free to use our time to earn more money (through work and/or investment) or to use it for the many other things that we value, especially spending time with our family and friends. Restoring Ireland's economy to health will mean not only getting back on a path of growth and job creation, but will also mean recognising that we are 'free to be free'. One of the more delightful ironies of the free market is that it also frees us (eventually) not to be all that engaged in the marketplace, especially the labour market.