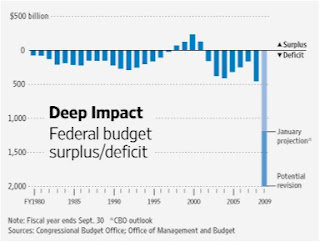 It's a sign of the times: Devo are releasing a new album. Who? Okay, they're a minority taste (they were back in the 1980s come to think of it), but their cover of the Rolling Stone's (I Can't Get No) Satisfaction is still, in my humble opinion, waaayy better than the original. Though I hasten to add I like the original too ...

Devo stands for 'de-evolution': the idea that societies can go backwards was well as forwards (the evolution bit). Back in the 1980s, the idea that things could get worse rather than better wasn't too hard a sell it has to be admitted. The band hails from Akron, Ohio - one of those rust-belt cities left behind in the 1980s and 1990s. So is 'de-evolution' back on the menu of possible futures for America?

I don't know, but truth is I worry about America. Partly for Americans themeselves (a very likeable people in my experience: they could teach the rest of us much in the way of civility and good service); but also for the rest of us - where America goes ...

Looking at the challenges facing Obama I am inclined to hope (sincerely) that he succeeds, but fear, frankly, that he will fail. The size of the gamble he is taking with the massive reflationary measures that have been proposed (and the budget deficit they imply as shown in the chart), is one of those double-or-quits kind of measures that don't tend to give unlucky participants a second chance.

I noted before when I was last in the United States the extent to which America is a land of contradictions. A land that purports to value freedom above all else and yet seems to be in state of semi-permanent 'lockdown', to borrow one of their ubiquitous additions to the English language. Indeed, as this powerful essay by Glenn Loury points out: the United States has become a nation of jailers. The statistics are quite horrific:

We imprison at a far higher rate than the other industrial democracies — higher, indeed, than either Russia or China, and vastly higher than any of the countries of Western Europe. According to the International Centre for Prison Studies in London, there were in 2005 some 9 million prisoners in the world; more than 2 million were being held in the United States. With approximately one twentieth of the world’s population, America had nearly one fourth of the world’s inmates. At more than 700 per 100,000 residents, the U.S. incarceration rate was far greater than our nearest competitors (the Bahamas, Belarus, and Russia, which each have a rate of about 500 per 100,000.) Other industrial societies, some of them with big crime problems of their own, were less punitive than we by an order of magnitude: the United States incarcerated at 6.2 times the rate of Canada, 7.8 times the rate of France, and 12.3 times the rate of Japan.

Perhaps this extraordinary culture of punishment is an inevitable corollary of America's extraordinary religiosity? It's a factor, alongside the gruesome legacy of endemic racism, social disadvantage and the absence of the social binds of collective welfare provision that Europeans and others have adopted (with all their own unique faults).

The prison statistics are just one indicator of the seismic tensions underlying America's society and economy. But what if Obama fails? What then of the tensions that threaten to erupt? I'm inclined towards a view of America's future similar to that described by Bruce Sterling in his book Distraction: a Balkanized United States characterised by regional power struggles and ongoing social and economic convulsions. Though Sterling's book was a work of science fiction, there are some commentators, such as Dmitry Orlov, who speculate that the social collapse of the United States is inevitable, just as it was in the USSR (n.b.: as 'pessimism porn' goes, this is hard core - you have been warned!) Mind you, for a while there I thought Ireland was rapidly transitioning to Stage 3 of his Five Stages of Collapse: but I'm more optimistic for now.

Nevertheless, America won't be the same again when this crisis has passed, nor will Ireland come to think of it. I hope that 'Hope' is enough. But in the meantime, there's always Devo ...