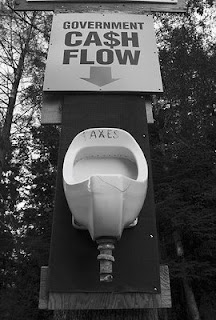 Imagine you run an investment fund in Germany and you are looking around for places to invest your money (what's left of it). How likely are you to invest in an Irish bank right now? Unlikely, I'm sure you'll agree. Very. Which brings us to the problem facing the Irish government and its plan to divert rapidly declining tax revenues in order to invest in AIB and Bank of Ireland in the coming weeks. The plan is contingent on the likes of our hypothetical German fund manager coming up with the goodies as well. There's the problem.

Which must eventually mean the government will have to come up with a Plan B. Such as the Plan A advocated by Willem Buiter to separate out good banks from bad banks. Moreover, as he explains today, such a plan is a) better for the taxpayer and b) fairer as well:

The Bad Bank solution creates moral hazard, because it rewards past reckless investment and lending. It also represents an inefficient use of public funds in stimulating new lending by the banks. To stimulate new lending, a subsidy to or guarantee of new lending is more cost efficient than the ex-post insurance of losses that have already been made on old lending, even though their true magnitude is not yet known. The Good Bank solution leaves the toxic waste with those who invested in it and with those who funded these activities, freeing government funds for reducing the marginal cost of new lending or increasing the expected return to new lending.

We also need to recognise that Ireland shares many of the same banking and economic problems as other countries. As John Redwood MP notes in another one of his excellent blog posts (is there a single Irish TD capable of similar clarity and insight?):

The UK, the US, Spain, Ireland, the Eastern Europeans and a few others borrowed too much. Banks got over extended, and then the authorities called abrupt time on the party leading to a huge hangover. Meanwhile China, Germany, Japan, and some others worked hard and saved hard, building up large surplsues which they lent back to the overborrowed.

The different countries need different solutions to help resolve the crisis. The saving and exporting countries could afford to spend more and create more demand at home. That would be very helpful. The countries that have borrowed too much need to control their borrowings and learn to live closer to their means. They need to save and export more, not reflate by borrowing too much.

The bad banks should not be bolstered and subsidised on the collosal scale this government favours. They should be made to own up to their losses, cut their costs, and get their businesses into shape. Far from lending more, they should be getting their risks into line with their capital. If the government must see more lending to UK businesses and individuals it should be done through good banks and new banks, not through the costly and distorting mechanisms of the bad banks. The government should learn that business does not need more loans, but more orders, not more bank debt but more revenue.

The approach our own government is taking risks burdening a generation of tax payers with a 'solution' that will only exacerbate the economic difficulties we now face. And pathetic acts of stunt politics - such as capping the salaries of senior bank officials - won't make a blind bit of difference to the outcome. A classic case of 'cent wise, euro foolish'.