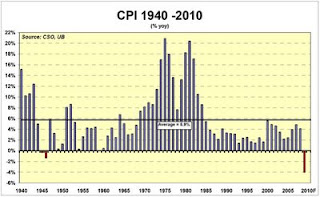 The Bank of England Quarterly Bulletin for Q1 2009 has an interesting analysis of the hypothetical impact of deflation. For the UK, the prospect of deflation remains just that, something that might happen since consumer prices there are still rising at 3.0%. Here in Ireland we are already experiencing deflation, the annual Consumer Price Index fell -1.7% in February. Recent forecasts from Ulster Bank project annual deflation of -4.0% for 2009, the first time we will have had a full year of deflation since the Second World War, as illustrated in the chart from their quarterly report.

Though there is much to be said in favour of deflation, the Bank of England analysis reminds us of some of the disadvantages (illustrated with reference to the situation in the UK), particularly in terms of a deflation that follows a credit boom (or debt deflation in the jargon):

The key element to the debt deflation channel is the transfer of wealth from debtors to creditors caused by an unexpected fall in inflation. Since debtors are likely to have a higher propensity to consume than creditors, demand is likely to fall. For this mechanism to matter, the fall in inflation must be unexpected relative to when the debt contract was entered into; so for example, if inflation were to fall unexpectedly by 2% for two years, the real debt burden on existing nominal contracts would necessarily be 4% higher. To the extent that borrowers are committed to fixed interest rate payments on their loans, then the burden of real interest payments will be correspondingly greater too; in the United Kingdom, some 40% of mortgages are on a fixed-rate basis. And real interest payments would also increase if nominal interest rates did not fall in line with inflation either because policy is prevented from doing so ... or because banks increased their lending margins. There is some evidence that this has been happening recently in the United Kingdom.

Here in Ireland we now have a situation whereby many households and businesses with fixed rate borrowings (or slow-to-adjust-downwards borrowings), are caught in a debt deflation trap: their incomes/revenues are contracting but their debt repayments remain fixed and are actually increasing in real terms. Research by my own company for the National Consumer Agency, published yesterday, shows that nearly one in four adults in Ireland are now finding it difficult to meet their loan and/or mortgage repayments (see slide 12).

But it isn't just households and businesses that can get caught in a debt deflation spiral. So also can the state. Colm Keena points out in today's Irish Times that as the economy shrinks the cost of funding the National Debt rises (even at near zero interest rates). With the government under increasing pressure to borrow, the prospects of funding extra debt looks increasingly onerous - especially if the economy shrinks next year as well (as Ulster Bank are forecasting).

So rather than all sink together, we need to put in place something like the Grand Bargain that John McHale describes over at the Irish Economy blog: including a 10% nominal wage cut for the public sector and a freeze on social welfare payments. Not very pleasant for those affected, but a lot less pleasant than the 100% cuts some 1,000 private sector workers are experiencing every day as they lose their jobs. The recent NESC analysis of Ireland's Five-Part Crisis reaches a similar set of conclusions about how to restore sustainability to the public sector's finances, including:
Which I presume is 'Social Partnership speak' for:
All very sensible, and it might work too - so long as the public sector trade unions do not insist on outsourcing the recession to the private sector as they have until now (all in the name of 'fairness' of course).

But getting it right in the forthcoming budget will be a necessary but not sufficient condition for recovery. We still have the appalling overhang of the banking crisis and all that it means for Ireland's reputation abroad as well as for the domestic economy. This was brought home to me by a recent IMF paper on The State of Public Finances: Outlook and Medium-Term Policies after the 2008 Crisis (pdf). Table 1 on page 7 shows the Irish Government's exposure to the financial sector (in terms of support and commitments) equal to 263% of GDP - vastly higher than any other country surveyed, and nearly ten times G-20 average. Boy have we boxed ourselves into a corner ...

And of course the two issues of the budget and the banks are connected. The right budget will send the right signals to the international markets that Ireland means business. This is important because today's FT Alphaville reports a UBS study showing that two thirds of the increase in Ireland's and others' sovereign CDS spread is due to risk aversion rather than fundamental doubts about the economy. A point supported by a separate analysis of the recent increase in the US CDS which notes that:

The most important point to be made here, the same one I make in my AIG post, is that, one shouldn’t look at CDS as a “default” trade. Though their pricing is clearly driven by the likelihood of default and the payout upon default, I can tell you that 99% of people buying CDS do not believe that the entity upon which they are buying protection will actually default. In this, they are similar to investors in stocks. People buy and sell stocks because they think the stock in question will increase or decrease in price. Same goes for CDS.

... I think one thing we can safely dismiss as the driver behind the widening of US CDS spreads, or in fact any sovereign spreads, in the market is any kind of fundamental view of where these spreads should be.

This is good news for Ireland: get the Budget right - including a measured contraction in public sector spending that does not exacerbate the already weak level of demand - and we will likely be rewarded quickly by falling CDS spreads and access to cheaper borrowing. This will even help Ireland's personal and business borrowers - which in turn can help us avoid the debt deflation spiral that threatens to leap from the text books into reality.
Posted by Gerard O'Neill at Monday, March 16, 2009