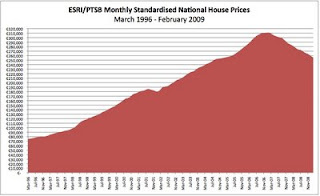 The latest ESRI/PTSB house price measures points to a significant drop in average prices. Irish house prices - like Irish equities - peaked just over two years ago in February 2007. We've been getting poorer since. House prices are down 18% since their peak, equities are down 80%.

Most people with an interest in the housing sector that I've spoken to (lenders, developers, landlords, buyers) are convinced that prices have fallen even further than the average fall indicated by the ESRI data. I'm sure they're right. Moreover, nobody thinks all the price falls are behind us: most expect more to come (a lot more, if you are UCD's Morgan Kelly).

David McWilliams suggested recently that Ireland's story was like that of Las Vegas: we gambled on a perpetual boom and ended up eating (cement) dust. Though Ireland's housing market hasn't fared quite as badly as Nevada's: average house prices in Las Vegas are about 50% down from their peak, and the number of foreclosure house sales now exceeds 'regular' house sales. Maybe it's just a matter of time ...

There are other Ireland/USA parallels as well. I've just read Peter Schiff's book Crash Proof - How to Profit from the Coming Economic Collapse. Cheery stuff. And a remarkably prescient book published at the end of 2006. He famously predicted the credit crisis and the great deleveraging that has followed. And he is unforgiving about the consequences: let the failed banks fail; avoid government binge borrowing to cure the consequences of private binge borrowing; and be prepared for the pain of adjusting to an economy based on wealth creation rather than wealth consumption. Here's a brilliant, sometimes very funny podcast of Schiff speaking recently on the Lew Rockwell show.

Looking at the US housing sector, he expects a major shift towards renting rather than buying. Something he does himself. As he says in the podcast: "People say: 'why rent, you're throwing away money? I say, I need a roof over my head. Accommodation is a consumable like food: yet nobody says 'why are you throwing away money on food'?!" I think his outlook is right for the United States, and it also applies to Ireland, as I've written about myself. The Irish people will shift away from mortgages to renting not because of house price uncertainty, but because of income uncertainty. And that isn't going to change any time soon.

By the way, to get a flavour of Peter Schiff's powers of prescience check out this YouTube video, seen by nearly 1.3 million people already: