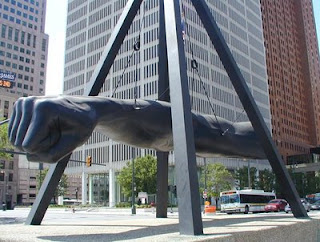 The demand for limited government has absolutely nothing whatsoever to do with a belief in the essential goodness of human nature. No - all human beings can be, and often are, selfish, destructive, venal, vicious, stupid and desperately wicked. Rather, it is based on an insistence that the political class are made from the same human material. Shuggy's Blog

Poor old Gerry Ryan - I kind of felt sorry for him as he wilted under the gentle prodding of his employer, listeners, colleagues, and other media all telling him to 'take the cut'. As one, fictional RTE presenter (Ross O'Carroll-Kelly's mother) lamented in a recent hilarious instalment: "A pay cut? I’ve never heard the like of it in my life. Do you think if advertising revenue was up, they’d be phoning me saying, ‘This is terribly embarrassing, but we’ve suddenly got lots and lots of money – we’re going to give you a ten percent increase’? Of course they wouldn’t! So I don’t want to hear any more of this paycut nonsense."

Gerry is a victim of the 'visible fist': an apt metaphor for what happens when governments and politicians decide to make pay a policy issue. Just look at the furore over the AIG bonuses in the United States and the dangerous decision to introduce special, retrospective taxes specifically to claw back up to 90% of the same bonuses.

But I tend to find this type of moral outrage more than a little galling. After all, the biggest employer in this country (and most others) is the government itself. And our own government has been AIG-like in its extraordinarily generous remuneration packages (including pensions) for most of its senior employees. Most comparisons of the salaries of senior, Irish public sector employees with their counterparts elsewhere are embarrassing in their largesse relative, indeed, to much larger and richer countries. One such comparison that brought it home to me was that the governor of the Central Bank of Ireland (most of whose work is now done by the ECB) is paid more than twice what Ben Bernanke earns as head of the Federal Reserve.

The immoral outrage that we have been subjected to in recent months fails to address two key questions, namely: 1) what is any employee worth; and 2) why should any employee be paid more than another? Gerry Ryan can point to advertising revenues for his show in relation to the first question, but most of us don't have such direct indicators. As for the second: could anyone do as good a job as Gerry (or better) for considerably less? Perhaps: RTE would take a risk replacing him (assuming they could contractually etc) - would the pay off in cost savings offset any potential advertising reduction? Tricky one that. Same goes for the heads of Irish banks who have had a cap put on their salaries in return for receiving taxpayer support. What should they be paid? Or their new political masters come to think of it?

In a free market, of course, the price of labour is set in much the same way as other prices: through the interaction of willing buyers and willing sellers. When demand exceeds supply the price of labour goes up (as it did, during the boom); when supply exceeds demand then the reverse applies. Or at least it should: but then don't forget we have a panoply of minimum wages, social welfare entitlements, labour market regulations, trade unions and professional bodies, social partnership agreements etc to ensure that demand and supply are more likely to be mis-aligned than aligned much of the time. Add in politicians trying to score points and adopt poses to prove they are more outraged than the next representative and it risks turning quite nasty. Especially when they used the boom years of the Celtic Tiger to pay themselves salaries that would make some premier league footballers blush. I'm with Don Boudreaux when he vents his moral outrage at all this immoral outrage:

The single greatest instance of intellectual foolishness today is the continuing pretense that politicians are serious people worthy of serious consideration. They are scoundrels, each and every one, regardless of party (although some of them, it is true, are more scoundrelly than others). For any scholar to pretend that these people are disinterested servants of the public welfare -- to pretend that the words politicians utter or send out in press releases are meant to promote any goal other than politicians' own glorification and pursuit of power -- is for that scholar to be duped to a degree that should be more embarrassing than would be the discovery that that scholar believes the earth to be flat or that Big Foot was in league with Lee Harvey Oswald to murder JFK.

So we should be very careful about letting politicians use the visible fist to answer questions best left to the invisible hand. I'm sure Gerry would agree.
Posted by Gerard O'Neill at Monday, March 23, 2009