Legalise It, Tax It 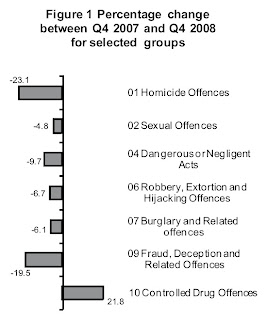 Here's an idea for our cash strapped government: legalise drugs and tax them instead. We've tried prohibition and it hasn't worked (or conversely it has, if you are one of Ireland's recession-proof drug lords). As I've noted before, we have a drug prohibition problem in Ireland, not a drug problem.

The latest report on Irish crime statistics from the CSO (pdf) shows crime levels in every category falling with one obvious exception: controlled drug offences. A primary reason for the fall (though usually not acknowledged by politicians and the Gardai) is the steady fall in the number of young men in the Irish population aged 15-24. They are the age group most likely to be involved in most of the crime categories listed in the chart. We should be mighty grateful for our demographic situation, by the way. Heading into a recession with a burgeoning population of young men would be a recipe for rather more than noisy protests outside the Dail.

There is a precedent: Ireland has not been shy of policy innovations in the past, so why shouldn't drug policies be another area where we could lead the way. As the Economist observes in a reflection on 100 years of failed prohibition policies:

In fact the war on drugs has been a disaster, creating failed states in the developing world even as addiction has flourished in the rich world. By any sensible measure, this 100-year struggle has been illiberal, murderous and pointless.

By legalising drugs we can apply the same controls to their production, distribution and consumption as we apply to alcohol and tobacco. And there's a triple bonus to society: 1) spending on crime prevention will plunge (not just on drug related policing but on all the criminality arising from the activities of drug financed gangs), 2) crime levels overall will plunge thanks to 1, and 3) the government becomes a net recipient of monies from drug consumption rather than a net spender via law enforcement.

Nor does it have to be a 'once-and-forever' policy shift. As organisations like Transform and others have argued, the legalisation of drugs could be tried for, say, 3 years: long enough to wipe out the gangs and criminals; to determine the wider health and social consequences; and to refine policies further. Just as we continually refine policies on alcohol and smoking consumption (both of which have declined markedly by the way, despite their legality and affordability).

As for worried parents (like me) the message is simple: your children are already living in a society with ubiquitous access to these drugs - their decision to use them is as much subject to what you advise them to do as is their consumption of alcohol and cigarettes. Just because something is legal doesn't make it something you have to approve off (does anyone encourage their children to smoke?)

So there you go: legalise it, control it, tax it. The Minister for Finance will have my full support on that one.
Posted by Gerard O'Neill at Friday, March 06, 2009