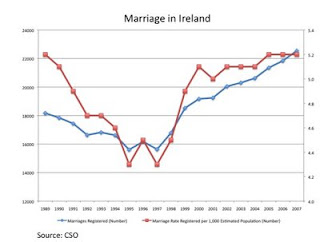 A happy Mother's Day to all mums. The latest CSO statistics on births, deaths and marriages (pdf) show that becoming a mother is increasingly popular in Ireland, with our birth rate substantially up on a decade a go. This is good news: many European countries are experiencing a decline in births. Even better news is that marriage is also increasingly popular - as the chart shows. And this despite the poisonous, PC-led attempt to foist the word 'partnership' on us: the Irish people, in their usual wisdom, aren't buying it.

The ongoing debate in the United States about gay marriages has certainly had the effect of forcing those who favour the concept of heterosexual marriage to to justify their preference for the institution itself. Ryan Anderson provides a concise justification when he observes that:

Marriage attaches a father to his children -- and to his children's mother -- and fulfills the societal need for children to have the love and care of both mother and father. This institution is the natural response to human sexual embodiment as male and female, to human longing for bonding and intimacy, and to human dependency and need (especially in view of the fact that human newborns, unlike newborns of many other species, require many years of nurture before reaching self-sufficiency). That is why a well-ordered society protects and encourages marriage in the first place.

That last point about a 'well-ordered society' is vitally important. We give our children the best chance possible by raising them in families with their father and mother present - and marriage tends to maintain that presence better than any other arrangement. Their chances of going on to higher education, to gaining employment and to avoiding crime are vastly higher. Which is good for the children, and good for our society. Again, the Irish people get this: which is why the vast majority (68%) of births are to married women.

Even more encouraging is the greater involvement by fathers in family life. This has always been a bone of contention with most married couples with children. It even figures in this delightful series of Tests for Husbands and Wives from the 1930s (go ahead: rate yourself against your parents'/grandparents' marriage!). Looking ahead, new UK research suggests that family life is going to become more cohesive over the next 20 years - reversing some of the trend in family breakdown of recent decades. All because fathers are becoming more involved in family life: sharing more of the responsibilities that too often fall on mothers. A small silver lining perhaps in a cloudy sky of uncertainty.

All-in-all it looks like a good future for mothers and their families: that's something to celebrate on the day that's in it. Anyway, got to go, my turn to make the dinner ...
Posted by Gerard O'Neill at Sunday, March 22, 2009