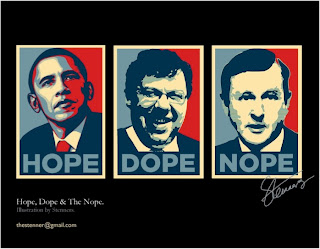 I had an interesting discussion last week with a number of senior bankers about what life in Ireland will be like when things 'get back to normal'. We were all agreed that the 'new normal' will be a lot different from the 'old normal'. Most people get this: after all, key features of the economic landscape have been transformed. Over 80% of the nation's wealth in equities has been wiped out (€100 billion) in the past twenty four months. The value of housing wealth has shrunk, so have the pension funds built on equities and property. There is no going back.

Which is why I find the current debate about taxation so depressing. Most of those calling for higher taxes simply assume that a bit of taxation and borrowing now will see us through the recession and we can then reduce both when things get back to normal. But the new normal won't be like the old normal. We will not return to a pattern whereby single digit growth rates were used to fuel double-digit public spending increases. Looking back, Ireland was like a country that discovered oil and then partied its way through the reserves. Only the 'oil fields' we discovered were the savings of the eurozone's ageing population: and we 'consumed' them like it could go on for ever. But it didn't.

We need to avoid the path of those countries that failed to adjust to the 'new normal', countries like the UK and Mexico. Both have past the peak of their oil production and are facing wrenching adjustments to their taxation and public spending habits as a result. In the case of the former, there are concerns that the economic crisis will lead to serious civil unrest. In the case of the latter, there are even concerns that the state itself will collapse.

Ireland's economy - like the UK and United States - is undergoing a radical restructuring: there is no going back. This 'Great Restructuring', as Jeff Jarvis has described it, will more akin to an earthquake than a passing storm. He notes a New York Times report that:

In key industries — manufacturing, financial services and retail — layoffs have accelerated so quickly in recent months as to suggest that many companies are abandoning whole areas of business.

“These jobs aren’t coming back,” said John E. Silvia, chief economist at Wachovia in Charlotte, N.C. “A lot of production either isn’t going to happen at all, or it’s going to happen somewhere other than the United States. There are going to be fewer stores, fewer factories, fewer financial services operations. Firms are making strategic decisions that they don’t want to be in their businesses.”

Which brings me back to taxation. All of those advocating tax increases blithely assume that there will be same number of high earners, of businesses, of pension contributors, of retail sales, of landlords etc as before - so the government will just take more tax of them and things will continue on as 'normal'. They should get out more often: normal isn't normal any more.

So instead of fatuous comparisons with taxation levels in other EU countries (who cares?) what we need is to compare our level of taxation with a) what we need and b) what we can afford. I believe the two are not as far apart as many think: though I don't think we would have anything like the current level and pattern of public sector spending if taxpayers were actually asked to specify what they want and are prepared to pay for. Maybe one good thing to come out of our present difficulties will be to put the taxpayer centre stage in the decision making process.

If that becomes the new normal then I'm all for it.