The Price Elasticity of Politics 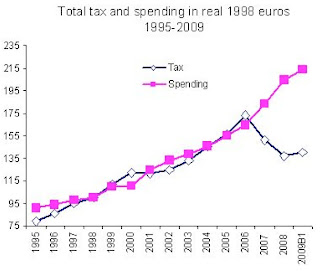 The Green Party wants to put a 1c tax on texts. The Labour Party wants to remove tax breaks from landlords. Some politicians have clearly never heard of incentive effects. Generally if you make something more/less expensive to do then people will do less/more of it. Like increasing the vat rate in December (the biggest month of the year in retailing) ... and seeing vat revenues fall in January and February.

Politicians are supposed to have superhuman powers of empathy (all those chats in their clinics every weekend must surely demand it) and yet they cannot put themselves in the shoes of the people they want to tax and ask themselves 'what would I do if it got more expensive/less rewarding to do something because of this tax'? But they're going to have to extend their empathy to taxpayers pretty soon because the gap between government spending and taxes is yawning widely - as illustrated in the chart from a recent post on The Irish Economy blog by Patrick Honohan.

The message from the chart if you are a taxpayer is pretty clear: you've got to cut expenditure. The message the government seems to be taking from it is that it must increase taxes. The problem is that the government's taxation options are extremely limited:
So what spending should be cut? The answer is: I don't know. Nor does the Minister for Finance, the Green Party or any one individual for that matter. The people who know - the managers of sections, divisions and organisations within the public sector (including the health services) - are the ones who can identify where cuts could be made to maximum effect. They should be empowered to do just that: give them a budget and tell them to 'do what you need to meet it'. Including pay cuts and redundancies as a last resort (though I'm guessing more efficient work practices, less sick leave and less overtime might be the main gains).

Any government that thinks it can simply increase taxes without consumers, workers, employers and mobile phone users responding negatively in the current climate is delusional. I sincerely hope they're not.
Posted by Gerard O'Neill at Thursday, March 05, 2009