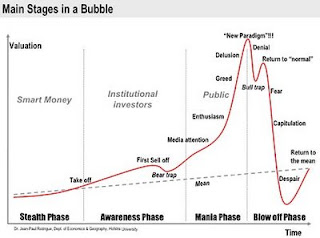 Deutsche Bank Research published a commentary today on Ireland's situation. If they were Americans I would summarise their message as 'suck it up'. Instead they conclude:

Due to the protracted economic recession (real GDP already contracted by around 2% in 2008 and is forecast to fall further in 2009/10) the former Celtic Tiger with annual average real GDP growth rates of 7.5% (1995-2007) has become a patient that needs to swallow the bitter medicine of correcting past exuberance.

The crucial element of their analysis is what is happening to housing (and the wider fallout from same). It is only through a recovery in house prices, land prices and with them bank balance sheets that we will see the surest signs of recovery. But as the chart shows (from a fairly gloomy analysis of the outlook for the UK's housing market), it isn't entirely clearly that the worst is over for housing yet. Irish house prices are 17% below their peak in February 2007 (coincidently - or was it? - the month the the Irish stock market peaked). But nobody seriously thinks that all the bad news on housing has been priced in to today's prices. We're in the blow off phase all right, but I suspect we're closer to the bull trap than to the slough of despair. Time will tell, and fairly soon I suspect.

The DB Research also touches on the difficulties facing the Irish government in terms of using fiscal policies to see us through the current crisis - sovereign bond and CDS spreads and all that. But I think Willem Buiter comes closer to explaining the problems facing the Irish government, though it happens to be in the context of his concerns about the current Keynesian policies of the US government. He notes in relation to the conditions for Keynesian policies under a depression-economic situation to succeed that:

... even if two of the necessary conditions for ... are met - (1) there are widespread idle resources of labour and capital to meet demand and (2) there are sufficient numbers of liquidity-constrained and current-disposable-income constrained households that act as ‘myopic’ current income-constrained, Keynesian consumers - there is still an important and potentially binding financial crowding out constraint on the ability of governments to use expansionary fiscal policy to boost aggregate demand.

In addition to (1) and (2) being met, there must be sufficient ‘fiscal spare capacity’ - confidence and trust in the financial markets and among permanent-income consumers, that the government will raise future taxes or cut future public spending by the same amount, in present discounted value terms, that they want to boost spending or cut taxes today. Without this confidence and trust, financial markets and forward-looking consumers will be spooked by the spectre of unsustainable fiscal deficits. Fear of future monetisation of public debt and deficits, or of future sovereign default will cause nominal and real long-term interest rates to rise. Ultimately, the sovereign will be rationed out of its own debt market.

That's the scary prognosis for Ireland: we simply don't have the 'fiscal spare capacity' with our budget deficit already plunging towards 10% of GDP and tax revenues in free fall even as public expenditure marches sublimely upwards. And with the construction sector in the deep freeze until house prices start picking up again then it really does look like we'll have to just take the medicine, bitter and all as it undoubtedly will be.
Posted by Gerard O'Neill at Wednesday, March 11, 2009