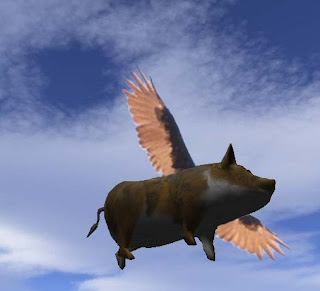 If, like me, you've managed to survived SARS, bird flu, mad cow disease, the Ebola virus, and Legionnaire's disease then you're probably taking this latest crise du jour with a pinch of salt (or a shot of whiskey or an aspirin). After all, just how bad can the future be? Okay, here's one, fifty year long scenario:

In this ﬁfty year period, a massive depression, coupled with the collapse of a key resource, undermines traditional economic models. Even as the global economy recovers, a global war erupts, a horrifying accident triggered by political systems overwhelmed by increasingly rapid communications, a tragedy multiplied by the almost casual use of chemical weapons. The end of this war coincides with the emergence of a pandemic the likes of which the world has never seen, killing millions upon millions -- and, combined with the war, almost eliminating an entire generation in some parts of the globe.

After the pandemic ebbs, a brief, heady economic boom leads many to believe the worst has ended. Unfortunately, what follows is a global depression even more massive than the previous one, causing hyperinﬂation in some of the most advanced nations, and leading directly to the seizure of power by totalitarian, genocidal regimes.

What follows is perhaps predictable: an even greater world-wide war, nearly wiping out a major culture and culminating in a shocking nuclear attack.

Scary, eh? And it was: because that was the 'future' from the vantage point of 1900 (ht Jamais Cascio). Kind of puts things in perspective, don't you think?

Postscript: maybe the first half of the 20th century wasn't all that bad? Stephen Hume puts the infamous 1918 Spanish Flu pandemic in context: