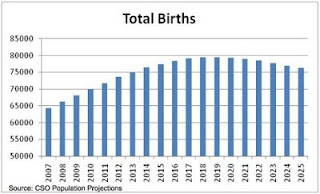 There's one senior manager in a professional services firm I know who has taken a substantial pay cut, along with everyone else in the firm. Her view is simple: she'll put up with it all (longer hours, lower pay, worried clients, unhappy colleagues) for another while. But if, say, it's still like this (or worse) in a year's time she'll just get pregnant and go on maternity leave - and have the baby she and her husband have been postponing for career reasons that just don't seem so motivating any more.

My advice to her? She may book her place in Hollis Street or the Rotunda soon: there's a baby boom under way in Ireland and it's about to get 'boomier'. The chart shows the projected numbers of births in Ireland. That number is rising and won't peak for another ten years or so. We are a lucky country in that regard.

Countries with declining populations on the other hand (much of central and eastern Europe and Russia, for example) face horrendous problems as their populations age rapidly, driving down productivity and increasing demands on their taxpayers for pensions etc. Though some are not waiting for the inevitable: Georgia recently had a sharp upward surge in births when the head of the Georgian Orthodox Church, Patriarch Ilia II, promised to personally baptise any baby born to parents of more than two children. Clearly a man who understands incentives!

Nevertheless, the longer term outlook globally is for most countries to go the way of Eastern Europe - countries like Brazil and Iran have already seen their birth rates fall rapidly below replacement levels. The United Nations now projects that the world's population could start declining as soon as 2040: much sooner than previously projected.

Of course, we're in a recession - so arguably the CSO's projections should surely be revised downwards? I'm not so sure. We have a lot of women (like the manager I know) who are in their late twenties and early thirties who, frankly, have to have their babies now or never - biology being what it is and all. The fact that we have a large cohort of women in the child bearing age group is what is helping us avoid the fate of eastern Europe: and if couples begin to believe that the recession is going to go on longer than expected, then nature will trump the economy and take its inevitable course. And given the, er, popularity of the baby-making process it might even do something for the mood of the couples involved.

As Janice Turner notes, it's all about young couples' expectations. If the ever-upward career ladder has been removed by the recession then quite a few female and male professionals will wonder what it all for. Also with rising unemployment causing many two-income households to become one-income households, just as they often do during maternity leave, then why not take advantage of the occasion? Of course, as it is the men who are losing jobs faster, I expect to see a lot more stay-at-home-dads in the next few years.

Either way, Ireland's baby boom looks set to continue. And a good thing too.
Posted by Gerard O'Neill at Thursday, April 02, 2009