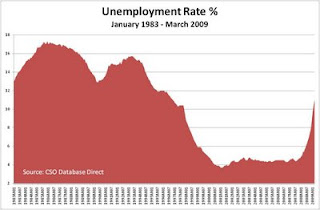 It's an apocryphal story from a few years back, but the story goes that a cinema audience at yet another Rambo/Terminator/xXx movie sequel got tired of one of the more dialogue-heavy scenes and started shouting 'fast forward, fast forward!' It feels that way about the trend in unemployment right now: as if someone has hit the fast forward button on the economy just as we need to hit the pause button instead.

The chart shows the extraordinary rate of increase in the live register based measure (updated with today's CSO report). It makes the 1980s seem positively sedate as rising unemployment goes. Right now the trend is like that stage in roller-coaster ride where you wonder if this is going to end horribly. The last time the measure was at 11%, by the way, was in November 1996, over twelve years ago. There then followed an extremely rapid fall in the rate - the mirror image of the extremely rapid rise now unfolding.

What is happening? It seems to me we are reaping the consequences of our conversion to a services-based economy from the mid-1990s onwards. Construction played a part too, of course. But the fallout from construction has (surely) worked its way through the live register trend. It's the wider services economy that is bearing the brunt of the fallout now. Moreover, in services companies, labour costs are a vastly higher proportion of total operating costs than in, say, manufacturing companies. The result is that a service companies have to respond quicker to a downturn in demand by reducing staff costs: reduced hours/reduced pay/reduced numbers.

The good news is that our services-dependence might well mean an equally sharp fall in unemployment when the recovery sets in. Though without the contribution of construction that we saw during the late 1990s the fall might be somewhat blunter. Calculated Risk makes the point that the different macro variables in the economy respond at different stages in the recovery, as summarised in this chart:

James Hamilton puts it more graphically (without the unemployment trend): 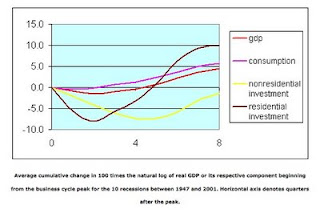 Either way, we're looking at double digit unemployment for at least another 3-4 years (if we are lucky), and it hasn't peaked yet, of course.
Posted by Gerard O'Neill at Wednesday, April 01, 2009