The Government Is An Externality 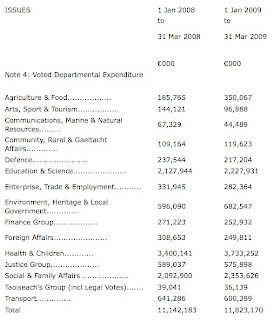 Externalities are usually deemed to be signs of market failure. For example, river pollution by a factory that harms the well being of people living downstream from the effluent. Economic externalities are mostly perceived as negative, but there are some positive ones as well. Usually the solution to the externality is for the government to intervene e.g.: through the enforcement of standards, new regulations etc.

But what if the government is the externality? This thought struck me yesterday looking at the latest Exchequer Returns. We have an extraordinary situation whereby government spending is rising significantly in real terms, even as tax revenues are falling. Nor is this predominantly due to rising social welfare spending in response to unemployment. Which you would expect. No, as the table shows, spending by the Department of Social & Family Affairs accounts for only 38% of the total increase. The rest is due to increases in spending on agriculture, health, local authorities, gaeltacht affairs etc etc.

Any business or household whose income has plunged by 23% would not then go on to increase spending by 6%. But if you're the government you do apparently. And that's what's worrying ahead of next week's budget. Even in the teeth of the sharpest downturn in the post war period, our government can't even keep spending static (say, by increasing social welfare spending but cutting back spending elsewhere). Which means that the focus next week will be on increasing taxes rather than reducing spending.

The fallout from this political externality will be severe. Take entrepreneurship - something the government purportedly wants to encourage. Here's James Manzi on the new realities facing would be entrepreneurs in the United States, where the government is using current deficits to fuel the recovery, knowing it means higher taxes in the future:

If entrepreneurs had a higher success rate, then many more people would start companies (probably about as many as go into long-hour, high-stress, high-compensation work like investment banking, corporate law, and strategy consulting). But when you multiply the potential payoff by the low odds of success, the expected profit doesn’t look so compelling. The pot of gold has to be big indeed to get people to make such a risky leap. Today, we’re increasing the deficit as a percentage of GDP to levels not seen since World War II. Any prospective entrepreneur must realistically expect higher future tax rates or increased inflation (or both), which will substantially reduce the future payout from a successful start-up company. The pot of gold has suddenly gotten a lot smaller.

In Ireland, we're not faced with the uncertainty of prospective taxes some time in the future, rather we are staring at very certain tax increases in the next few weeks and months. The pot of gold hasn't so much as gotten smaller as been taken away entirely.

Guess we're all going to have to get used to living downstream of the effluent from the policy mistakes now being made.
Posted by Gerard O'Neill at Friday, April 03, 2009