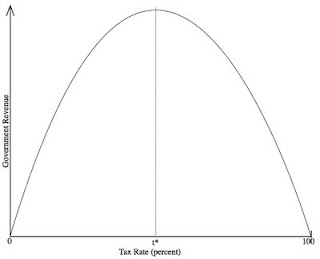 The Minister for Finance is, as Sir Humphrey might say, being 'very brave'. He has gambled on achieving most of his budget ambitions through tax increases, with rather less from expenditure cuts. Given his experiences with VAT (an increase in the standard rate in December followed by a calamitous fall in revenues the following months), he is being very brave indeed. Perhaps that is why he has opted to secure 73% of his tax increases through additional taxes on incomes (income levy + health levy + PRSI increases) rather than spending.

Nevertheless, his bravery is foolhardy. The families that will be hurt the most by this budget - working couples in their thirties and forties with dependent children, mortgages and insurance policies - will be confronted with a nasty reality: it isn't worth their while financially for both spouses to keep on working for sharply reduced net household incomes. So they won't.

We are embarking on a real world test of the Laffer Curve hypothesis: that above a certain level of taxation, employees withdraw their labour causing a collapse in government revenues from income taxes. Nor is the Laffer Curve some throwback idea from the 1980s: recent experiments in behavioural economics show the existence of a behavioural Laffer curve.

One consequence of the more flexible and fluid, predominantly private sector labour market that we now have in Ireland is just that: individuals and households are flexible - they make adjustments to the new circumstances that face them. Including decisions about whether to work, and for how long. I'm guessing Irish working couples will look at their paychecks this month and next and act accordingly.

Ireland is unique among OECD countries in responding to the global economic crisis through a policy of tax increases. Indeed, we appear to have a government that is living in a world more familiar to Sir Humphrey than to that in which most of us live. They are gambling the nation's future on the hope of a shortlived recession that will see us growing again in twenty months time. If they are wrong, and the Minister for Finance has to go to the IMF next autumn for the money to pay teachers' and nurses' salaries, then the decisions made today will seem not so much brave as reckless.

I suspect Laffer will have the last laugh.
Posted by Gerard O'Neill at Tuesday, April 07, 2009