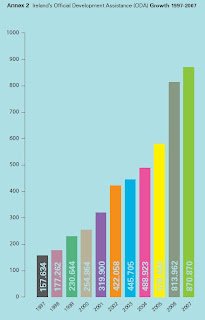 One good thing about the recent Budget - the only good thing come to think of it - is the decision to abandon the relentless expansion of Irish Aid. It is another one of those evidence-free policy measures that is more about being seen to do the right thing rather than actually doing it.

The Government still claims that Ireland will still be the sixth largest aid donor in the world on a per capita basis after the cuts. But so what? A look at where Irish Aid goes points to a range of NGOs and international bodies receiving small, medium and large sums of money, much of which gets added to the pot of larger overseas development aid programmes rather than going directly to end recipients.

Many of those involved in aid are compassionate people anxious to help those in need. But many others are motivated more by the inevitable desire for self-justification that all bureaucracies are subject to over time. And too much aid-giving merely subsidises the Vampire States that African economist George Ayittey sees as the biggest barrier to ending African poverty.

Perhaps the pause to the onward expansion of Ireland's aid programme will provide space to discuss the purpose of aid, and the most effective way of providing it (or not - as is sometimes the better solution). As William Easterly points out in a post on his excellent blog Aid Watch about one effective aid initiative he recently visited:

This kind of aid project is based on a lot of personal, face to face interaction, developing trust and a shared vision, so it is small scale, it has to let things proceed at their own pace, it can’t meet rigid pre-set output targets, it could never be judged by a rigorous “randomized controlled trial” methodology. In short, it involves the kind of tacit knowledge and individual adaptation that could never be converted into a routinized project implemented by the official aid bureaucracies. It breaks all the rules, and it works.

Perhaps if we set ourselves the target of spending Irish Aid wisely - rather than simply spending in order to meet a random target for aid as a percentage of GNP - then the recent cut will, for once, have better consequences than intended. And if we're really wise, we might even play a part in creating a world in which aid becomes history. Now there's a target to aim for.
Posted by Gerard O'Neill at Sunday, April 19, 2009